DURAZO COMES BACK TO HERMOSILLO FOR 2010-11 SEASON 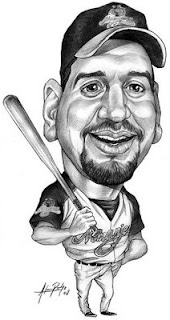 Former major league first baseman Erubiel Durazo will be back in Hermosillo to play for the defending champion Naranjeros this winter. Durazo spent last season with Obregon, where he hit .356 and pounded nine homers in just 32 games for the Yaquis, returns to an Orangemen he helped lead to Mex Pac titles in 2001 and 2007.

The 35-year-old Durazo, a native of Hermosillo, broke into the majors with Arizona in 1999 and spent four years with the Diamondbacks (playing in the 2001 World Series) before playing for Oakland from 2003 through 2005. He hit .281 with 94 homers over seven seasons in the majors, batting .321 with 22 homers and 88 RBIs for the Athletics in 2004.
Durazo was the LMP Rookie of the Year in 1997-98 and MVP in 2006-07 with Hermosillo, where he played 12 winters before being dealt to Mexicali and loaned to Obregon last season. He was traded to the Naranjeros by the Aguilas for infielder German Duran.
Posted by Bruce Baskin at 11:54 AM