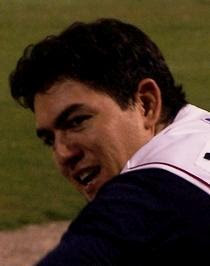 Agustin Murillo (pictured) hit his league-leading fifth homer and scored two runs while Jeff Salazar added two doubles and two runs to lead Obregon to a 7-5 win over Los Mochis Sunday night. The Yaquis win creates a three-way logjam atop the Mexican Pacific League first half standings as Obregon, Mochis and Guasave all sport 7-4 records, one game up on 6-5 Hermosillo and Culiacan. Mazatlan is sixth at 5-6, Mexicali holds seventh with a 4-7 mark, and Navojoa brings up the rear at 2-9.

Navojoa’s Matt Young leads the Mex Pac with a .452 batting average after going 3-for-3 Sunday in the Mayos’ 5-0 shutout over Mazatlan, Murillo tops the circuits in homers while both Amaury Cazana of Culiacan and Guasave vet Mario Valenzuela have 13 RBIs. Cazana had four ribbies in the Tomateros’ 20-4 shellacking of Hermosillo on Sunday night.
Hermosillo reliever Marco Tovar leads LMP pitchers with a 3-0 record, Los Mochis’ Alberto Castillo is tops with a 1.54 ERA (just ahead of teammate Dan Serafini’s 1.57) and Danny Rodriguez of Culiacan has a Mex Pac-best 19 strikeouts in 16 innings. Three closers have four saves apiece: Obregon’s Hector Navarro, Mazatlan’s Leo Rosales and Miguel Saladin of Guasave. Culiacan‘s Jose Silva has just one save to go with a win, but has yet to allow an earned run in four appearances out of the bullpen.
Posted by Bruce Baskin at 8:07 AM