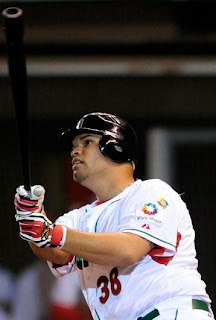 The Culiacan Tomateros have brought in a veteran Mexican infielder while the revolving door in Obregon keeps spinning with the addition of another import to the injury-riddled team.

First baseman Jorge Vazquez (pictured), who batted .270 with 18 homers and 62 RBIs for the Yankees’ AAA Scranton/Wilkes-Barre affiliate in 2010, has joined the Tomateros following an eight-week rest on the heels of the International League season. The 28-year-old Vazquez spent eight years in the Mexican League before signing with the Yanks in 2009. He hit .369 with 64 homers for Angelopolis between 2005 and 2006.
Meanwhile, the Yaquis have added A’s shortstop prospect Josh Horton after injuries to fellow imports Justin Ruggiano, Justin Sellers and Doug Clark. Horton was Oakland’s second-round draft pick in 2007 and spent most of the 2010 season with Midland of the AA Texas League, hitting .286 in 108 games. A University of North Carolina product, Horton gives the Yaquis a contact hitter and sure-handed fielder.
Posted by Bruce Baskin at 12:01 AM