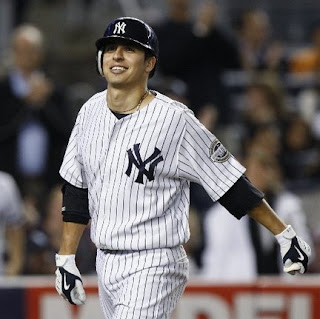 Major League Baseball has begun its playoffs for the 2010 season, and four players of Mexican descent were on postseason team rosters when play opened October 5.

Among American League teams, infielder Ramiro Pena (pictured) and pitcher Sergio Mitre are wearing New York Yankees pinstripes while infielder Jorge Cantu is making his playoff debut with the Texas Rangers. Pena, who hails from Monterrey, hit .227 in 85 games for the Yankees in a reserve role this year, while Mitre (a Mexican national born in Los Angeles) turned in an 0-3 record and 3.33 ERA in 27 appearances for New York. Cantu, who was raised in Reynosa, hit .256 with 11 homers splitting the season between Florida and Texas.
Pitcher Sergio Romo is the lone Mexican in the National League playoffs. The Brawley, California product was 5-3 with a 2.13 ERA as a reliever for the San Francisco Giants.
Posted by Bruce Baskin at 12:01 AM

Actually, Romo's teammate Sanchez (2nd base) is of Mexican decent. Just thought I'd leave you that nugget.

Thanks for writing. You're right: Freddy is from California but is of Mexican heritage. The sources I drew from are Mexican baseball websites and the four players I featured above were the only ones mentioned. I wonder what their criteria is? Parents should be born in Mexico? Tough to know where any lines should be drawn.