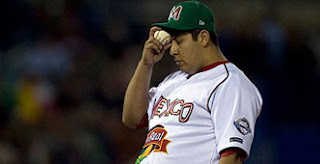 Mexico made it two consecutive dominant wins Friday by clobbering the host Czech Republic, 9-0, to go to 2-0 in Pool A play and punching their ticket into the second round of the tournament.

Mexico broke open a scoreless tie with four runs in the bottom of the third inning as Sergio Contreras blasted a three-run homer to center field off Czech starter Martin Schneider. The Mexican put three more tallies on the scoreboard in the fifth when Edgar Quintero sent his second homer in as many games off Schneider over the right field wall to make it 7-0. Schneider absorbed the loss for the Czechs by allowing seven runs in five innings. The longball brought in two more runs one inning later when Ivan Terrazas conked a two-run homer to center field to end the scoring for the game.

Mexico will finish pool play Saturday with a game against Australia.
Posted by Bruce Baskin at 1:47 PM