LMB: Durango out for '18, Rojos del Aguila to Nuevo Laredo 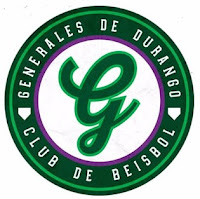 At the Mexican League's Assembly of Presidents meeting last Wednesday in Monterrey, decisions were made regarding two of the LMB's 16 franchises for the 2018 season.  The presidents decided to shut down the Durango Generales for the 2018 season to allow the franchise to find more solid financing while the long-rumored move of the Veracruz Rojos del Aguila to Nuevo Laredo was approved.

The Generales went through a trying first year in Durango after the Reynosa Broncos landed there following a disastrous 2016 in the city on the Texas border.  Renovations to Durango's 9,000-seat Estadio Francisco Villa went a month into the 2017 schedule, causing the Generales to play their first 27 games on the road before they finally played a May 2 home opener against Union Laguna, losing 9-1 to the Vaqueros.  That defeat extended a Generales losing streak that eventually reached 14 games after a surprisingly competitive start that briefly captured the hearts of Mexican baseball fans.

The team struggled the rest of the season, with players having to wait weeks for paychecks at times, LMB batting champion Yadir Drake leaving for Japan and infielder Daniel Mayora, whose 35-game hitting streak came within one game of matching the LMB single-season record, being sent to Monterrey for some badly-needed cash.  The Generales finished the campaign with a 43-66 record to come in last in the Liga's North Division.  Durango fans gave the beleaguered club unexpectedly decent support with an average attendance of 4,094 over 44 home games, good for seventh in the loop.  Even so, the league's presidents decided that the franchise should take next year off to allow undercapitalized owner Virgilio Ruiz to find investors.

That decision leaves the LMB at 15 teams for 2018, which creates a problem with scheduling as there would always be at least one team not playing at any given time.  There has been talk that another team would be taking next year off, with Union Laguna receiving much mention as the prime candidate.  The Vaqueros are owned by the Arellano brothers, who also operate the Yucatan Leones, but the team is now up for sale after a rocky 2016 during which RBI champion Ricky Alvarez was traded to Yucatan while the Vaqueros were fighting for a playoff berth.  The deal enraged fans in Torreon and Gomez Palacio and attendance dropped to 4,396 per opening after the Vaqueros had been drawing over 5,000 a night.  However, as Puro Beisbol columnist Hector Bencomo reports,  Durango governor Jose Rosas Aispuro is not accepting the LMB's decision, stating that the Liga's problems with the Generales lie with Virgilio Ruiz and not the state government, and that "we will look for someone who can sponsor and lead the project, but the professional team will stay in Durango...there is no doubt about it."

Then there are the Rojos del Aguila of Veracruz.  The port city has seen several teams come and go over the past century since the Aguila oil company formed its first team in 1903.  While Veracruz has been home to six Mexican League pennant-winners since 1937 (most recently in 2012, when current Tijuana skipper Pedro Mere was at the helm), attendance at Rojos del Aguila games has been up and down over the years and the team averaged just 2,661 fans per game at Estadio Universitario Beto Avila in 2017, 13th in the league.  In addition, the state government subsidies the team had been receiving for years dried up after Javier Duarte was driven out of the governor's office for alleged corruption and subsequently jailed after being captured in Guatemala earlier this year.  Veracruz hosted Leon in a one-game playoff qualifier on August 11, drawing 4,279 in what has turned out to be the last MLB contest played in the city.  For now.

The team, owned by Jose Antonio Mansur (although some have challenged that status), will play next year in the 12,000-seat Estadio Nuevo Laredo, which was completed in 2008 to make it one of the LMB's newer ballparks.  The old Tecolotes were one of the Liga's strongest teams in the 1980's and 1990's, winning the 1989 pennant amid a run in which the Tecos appeared in five Serie del Rey between 1985 and 1993.  A number of Mexican League legends like Nelson Barrera, Alejandro Ortiz, Carlos Soto and minor league baseball's all-time home run leader, Andres Mora.  However, that incarnation of the team sat out the 2011 season before being moved to Carmen the following year.  Ironically, the Carmen team lasted five years before the Delfines were shifted to Durango last winer (see above for how that went).

The Tecos were the first professional baseball franchise to split its home games between cities in two different countries between 1985 and 2003, going back and forth between Nuevo Laredo's Parque La Junta and West Martin Field in Laredo, Texas.  A very good book by Alan Klein on that experiment, "Baseball on the Border," was published in 1997.  Although the "new" Dos Laredos Tecos will play at Estadio Nuevo Laredo, a facility that has received criticism because it sits miles west of the city, the team hopes to play at least a few games across the Rio Grande in Laredo's 6,000-seat Uni-Trade Stadium, which was completed in 2012.  A team called the Laredo Lemurs of the independent American Association played there for five seasons, drawing just over 3,800 fans per game in 2012 but experiencing declining attendance annually until fewer than a thousand attendees pero opening showed up in 2016.  The Lemurs shut down this past May after an acrimonious split among their three owners.
Posted by Bruce Baskin at 12:00 AM