Monterrey, Puebla up 3-0 in division semis; rainout in Leon 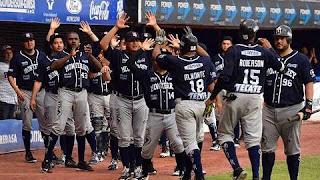 The Monterrey Sultanes and defending champion Puebla Pericos have gone ahead 3 games to 0 in their respective Mexican League division semifinal playoff series while the Tijuana Toros' Wednesday night win in Aguascalientes gives them a 2-to-1 advantage in that set.  The Yucatan Leones and Leon Bravos will have to wait to break their 1-1 deadlock after their game in Leon was postponed due to rain.

Zoilo Almonte and Luis Flores combined for four homers and eight RBIs to lead Monterrey to a 9-5 road win in Monclova, bringing the Sultanes to within a win of the division championship series.  Jesus Arredondo belted a couple of longballs (making it three homers in two games for the Los Mochis native) in Puebla's 6-1 victory over Quintana Roo in Cancun, putting the Pericos on the brink of the LMB South title series.  Cyle Hankerd scored the go-ahead run for Tijuana on a bases-loaded walk in the top of the eighth inning as the Toros went on to post a 4-3 comeback win in Aguascalientes after trailing 3-1 in the seventh for their second straight win after losing the series opener Sunday at home.  Heavy rain in Leon prevented the Bravos from hosting Yucatan in their Game Three on Wednesday night.  They'll try again at 1:00PM local time this afternoon with Games Four and Five moved to Friday and Saturday nights.

Monterrey 9-14-1, MONCLOVA 5-8-0
W-Rivas (1-0).  L-Morales (0-1).  A-8,500.  T-3:43.
Zoilo Almonte's two-run homer in the top of the first inning staked Monterrey an early lead and another Almonte homer in the third, this time a three-run blast, put the Sultanes ahead 5-0.  Monclova fought back for four runs in the bottom of the fourth, courtesy of a grand slam off the bat of former White Sox All-Star Carlos Quentin, who is batting .333 with five RBIs in the series after hitting .212 with two homers in 13 regular season games for the Acereros.  Luis Flores took over dinger duties from Almonte by swatting a two-run homer in the top of the fourth to give Monterrey a 7-4 advantage, but the stubborn hosts replied in the bottom of the frame when Jose Amador hit a leadoff double and later scored on a Jose Felix single.  Flores led off the sixth with his second homer, followed by a double from Chris Roberson, who eventually came in with the game's final run.  The contest was a marathon lasting 3 hours, 43 minutes as both teams combined to use 13 pitchers.

Tijuana 4-10-0, AGUASCALIENTES 3-4-3
W-Fisher (1-0).  L-L. Castro (0-1).  SV-Urquidez (2).  A-6,782.  T-3:50.
The Aguascalientes Rieleros had leads of 2-0 and 3-1 before Tijuana fought back with one run in the top of the seventh and two more in the eighth to sneak away with a 4-3 win over the host team.  As with the Monterrey-Monclova game, longballs were the order of the day.  Jose Vargas led off the bottom of the second with a homer off TJ starter Alex Sanabia to give the Rieleros an early lead, and Jesse Castillo duplicated the feat two innings later with a leadoff blast to make it 2-0.  Jose Guadalupe Chavez drew a bases-loaded walk from Aguascalientes starter Roy Merritt to put the Toros on the board, but Castillo's second homer of the night in the sixth (yes, it was a leadoff homer and yes, it was off Sanabia) to put the Railroaders up 3-1.  Alex Liddi's one-out solo homer in the seventh for TJ made it a one-run game, but the game was decided in the eighth when Corey Brown's RBI single tied it and a second bases-loaded walk issued by an Aguascalientes pitcher (Edwin Salas to Juan Apodaca) pushed Cyle Hankerd across the plate with the eventual game-winner.  Sanabia allowed just four hits in five innings, but three were four-baggers.  Another marathon: 3 hours, 50 minutes and 11 pitchers.

Puebla 6-9-0, QUINTANA ROO 1-10-1
W-Lugo (1-0).  L-Crenshaw (0-1).  A-5,754.  A-2:23.
Unlike the two LMB North playoff games Wednesday, this one featured only two homers and lasted just 2 hours, 23 minutes as Puebla took a commanding 3-games-to-0 series lead with a 6-1 win over Quintana Roo, making it a Wednesday sweep for road teams.  Jesus Arredondo's leadoff homer off Tigres starter Dustin Crenshaw opened a three-run second inning for the Pericos, who also benefitted from Alberto Carreon's two-run, bases-loaded single.  The 3-0 score stood until the bottom of the seventh, when Jesus Valenzuela hit a leadoff double, then scored on a Ramon Ramirez single.  That only served to nudge the Puebla offense from their nap as the Pericos put three scores on the board in the eighth, all off Arredondo's second homer of the night, a three-run shot off reliever Jose Meraz.  The Tigres actually outhit the visitors, 10 to 9, but only batted 1-for-8 with runners in scoring position while leaving eight baserunners stranded.  Puebla starter Jaime Lugo was sharp, allowing one run on seven scattered hits and no walks over six innings for the win.  Crenshaw (7 IP, 3 ER) took the loss.