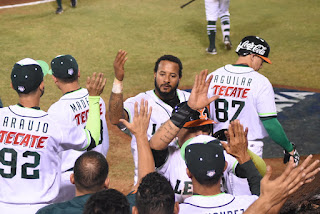 Diego Madero cracked a three-run homer to key a five-run outburst in the sixth inning as the Yucatan Leones defeated the Puebla Pericos, 7-6, Friday night at home to even their Mexican League South Division championship series at one game apiece.  In the LMB North title series, Horacio Ramirez pitched seven innings of one-run, four-hit ball as his Tijuana Toros pulled away from the Monterrey Sultanes, 7-1, in the border city, giving the Bulls a 2-0 lead in their best-of-7 set.

Saturday will be an off day as both series shift to Puebla and Monterrey, respectively, for Game Three action Sunday.  No pitching matchups have been announced for either contest.

Puebla took an early lead with two runs in the top of the first inning and built their advantage to 5-2 until the bottom of the sixth, when Yucatan scored five runs to go ahead, and the Leones never looked back in a 7-6 win over the defending champs in Merida Friday.  The Pericos had won Game One at Parque Kukulkan on Thursday.

The Pericos got things going early, scoring runs on doubles by Issmael Salas and Ricky Rodriguez in the first off Leones starter James Russell to go up, 2-0.  Yucatan got one run back in the second on Juan Francisco's leadoff homer and one more in the third on Diego Madero's RBI single to knot the score in the third, but the visitors plated three tallies in the fourth to regain the lead.  Puebla loaded the bases with one out against Russell, who gave up a go-ahead single to Alberto Carreon before being replaced on the mound by Alejandro Soto, making his first appearance for Yucatan since July 29.  After Julio Borbon brought in Jon Del Campo with a sacrifice fly, Soto hurt his own cause by dropping a two-out popup by Carreon as Sergio Perez (who was running on the pitch) motored in from third.

Puebla held their three-run lead until the sixth, when the first three Yucatan hitters got on base to chase Pericos starter Josh Outman.  Reliever Mario Morales was welcomed into the game by a two-run double by Sebastian Valle, bringing in.  With two on and two out, Diego Madero lofted a homer to left, giving the Leones a 7-5 lead.  The visitors closed the gap to one run in the eighth when a fielder's choice grounder to second by Carreon scored Cesar Tapia, but Yucatan closer Ronald Belisario got the final out of the inning and pitched a scoreless ninth with Jesus Arredondo grounding into a 6-4-3 double play to end the game.

Onetime Angels reliever Francisco Rodriguez, who's been a starter in Yucatan this year, pitched three scoreless innings out of the bullpen to earn the win for the Leones while Morales' bad fifth inning tagged him with the loss.  Madero finished the night with three hits and four RBIs for the winners while Valle had a pair of hits, two ribbies and a run.  Salas had three hits for Puebla, scoring one run and driving in another, and Del Campo contributed two doubles and a run for manager Tim Johnson's Pericos.

With the series tied at one game apiece, the two teams will play Game Three Sunday in Puebla.

The Toros registered their second one-sided win over visiting Monterrey Friday, but this one was closer than the final score implies.  Tijuana starter Horacio Ramirez fell behind, 1-0, in the top of the first inning when Ramon Rios scored for the Sultanes on a Luis Juarez sacrifice fly, then settled into a pitchers duel with his Monterrey counterpart, Angel Castro, as Rios' counter stood as the only score of the game heading into the bottom of the sixth.  Then the potent Toros offense went to work.

Isaac Rodriguez led off the frame with a single, moved to second on a sacrifice bunt by Jose Guadalupe Chavez and scampered to third when Castro uncorked a wild pitch to Roberto Lopez.  Castro then plunked Lopez to put runners at the corners, bringing up Corey Brown, who singled Rodriguez in to tie the game while Lopez moved to second.  Castro walked Cyle Hankerd to fill the bags and Jorge Cantu followed with a two-run single to left, giving the home team a 3-1 lead.  That was all for Castro, who was replaced by Nick Struck on the hill.  The Oregonian rewarded Monterrey skipper Felix Fermin by retiring Dustin Martin and Juan Apodaca to end the inning.

Tijuana essentially put the game away with a four-run eighth inning against Sultanes closer Wirfin Obispo.  Apodaca hit a two-run, ground-rule double with one out, then scored himself when Alex Liddi belted a two-run homer to left, bringing the score to 7-1.  It was left to Toros closer Jason Urquidez to take the mound in the top of the ninth, and while the Californian did allow a two-out double to Juarez, he induced Daniel Mayora into a groundout to Chavez at short to end the contest.

Ramirez earned the win for Tijuana as the ex-MLBer went seven innings and only allowed that single run in the first, scattering four hits and one walk while striking out four.  Castro was saddled with the loss, showing three earned runs on five hits for his 5.1 innings of work.  Rodriguez had three hits for the Toros while Brown had two hits, scored twice and drove in a run.  Juarez had two of Monterrey's five hits, including a double and his RBI sac fly.  A Tijuana crowd of 17,021 looked on, giving the Toros over 30,000 in attendance for Games One and Two.

The series shifts to Monterrey for Sunday's Game Three as the Sultanes try coming back from a 2-games-to-0 deficit.
Posted by Bruce Baskin at 8:37 AM

Thanks for keeping us updated on the two series , reads your log evry day . Leones fan so glad they pulled it out would be tough going to Puebla down two

That series could go all seven games. Yucatan has leveled off the past few weeks and Puebla's picked up the pace since Tim Johnson took over. Considering how the Pericos lost so many of their 2016 champions to Monclova, they've been more competitive than a lot of people expected (including their owner). Still, the Leones always get good pitching and while their offense isn't great, it's been good enough. Alvarez has struggled since coming over from Laguna, but he can carry a team when he's hot.

Thanks for reading. I hope BBM is as fun to read as it is to write.