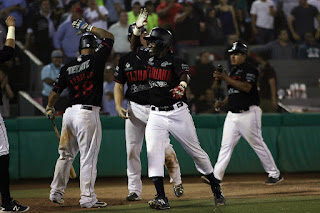 The Tijuana Toros knew they had an opportunity as difficult as it was enormous when they traveled to Monterrey for a three-game midweek series against the Sultanes.  Manager Pedro Mere's Toros had been looking up at Monterrey in the Mexican League's North Division standings all season, but Tijuana had whittled the Sultanes' lead down to two-and-a-half games by the time the set opened Tuesday.  The series gave the Bulls a chance to at least narrow the gap a bit, but they were facing a Monterrey team that leads the LMB in batting with a .315 average and had won seven games in a row, including road trip sweeps in both Campeche and Tabasco (where they endured lighting problems at Parque Centenario 27 de Febrero, where just 178 fans attended a doubleheader last Thursday).

The Toros not only accepted the challenge in front of them, they won all three games at Estadio Monterrey to pull a half-game ahead of the Sultanes in the standings.  Tijuana is now 54-26 (the best record in the Liga) while Monterrey fell to 53-26.  Monclova has been a few games back in third in the LMB North, but the Acereros have won their last eight games to pull four-and-a-half games out of the lead in what is shaping up to be a dandy division race over the last month of the regular season schedule.

Tijuana opened the series Tuesday with a 4-3 win as Dustin Martin's ninth-inning leadoff solo homer off reliever Thomas Melgarejo provided the difference.  Martin's blast gave TJ a two-run cushion that was enough to withstand a Monterrey rally in the bottom in the frame when closer Jason Urquidez gave up three hits, including an RBI single by Moises Gutierrez, and had runners on the corners with one out before striking out MVP candidate Chris Roberson and getting Ramon Rios to fly out to Corey Brown in center to end the contest with his 16th save.  Martin, who has struggled his way to a .250 batting average this season, went 2-for-3 with a walk and scored twice for Tijuana.  The loss wasted a 4-for-4 night for Sultanes' DH Luis Juarez, last winter's Mexican Pacific League batting champion who's hit .447 over his past ten games to raise his LMB season average to .299.  Toros starter Miguel Pena allowed two runs over six innings to go to 7-2 on the year while Angel Castro let in three scores over six frames for Monterrey to fall to 9-3.

The Toros held off Monterrey again on Wednesday night in a 4-3 win over the Sultanes.  Tijuana outhit the home team by a 13-6 margin, leaving ten runners on base, but the key hit of the night was a dribbler to the mound by Jose Guadalupe Chavez in the top of the sixth that enabled Roberto Lopez to come streaking in from third base to give the visitors a 4-2 lead.  Once again, the Sultanes came back to make it a one-run game in the bottom of the eighth when Zoilo Almonte poked a single into right field with runners at the corners to score Walter Ibarra from third, but Urquidez had a 1-2-3 ninth and struck out the last two batters to preserve the TJ lead for his 17th save.  Chavez singled twice and doubled as the Toros' leadoff batter, scoring once in addition to his run-scoring safety and three other Tijuana batters had two hits apiece.  Ibarra and Leo German each had two of Monterrey's six hits (a German double was the Sultanes' lone extra-base hit) as Tijuana starter Manny Barreda (3-6) allowed one run on two hits over six innings, striking out seven.  Monterrey's Jorge Reyes (1-2) was scuffed for ten hits in five frames in the loss, but only let in two runs.

Tijuana had to go into overtime for Thursday night's 8-4 victory to complete the broom job.  The Toros scored single runs in the second (Oscar Robles doubling in Jorge Cantu) and third (Alfredo Amezaga socked a leadoff homer) as the MLB veterans gave the visitors a 2-0 advantage.  Juarez evened the game with a two-run homer in the fourth off TJ starter Horacio Ramirez, another MLB vet,  and then took a 4-2 led two entradas later when Almonte lofted a two-run bomb off Toros reliever Ricky Ramirez, who'd walked Rios to open the inning.  This time, it was Tijuana's turn to come back, scoring once in the eighth on Brown's leadoff homer (his LMB-leading 19th) and knotting the contest in the ninth when Chris Valencia came in from third when Ibarra bobbled a Robles grounder to short.  After a scoreless tenth inning, the Toros put four runs on the board in the top of the eleventh as Martin lined a two-run single off Marco Carrillo to cap the scoring.  Edwin Quirarte came in from the bullpen to retire the Sultanes in order to end the game and series with another Tijuana win.  Chavez, Brown and Robles all had three hits to key the Toros' 17-hit attack, with Brown scoring twice, while Almonte's homer and single represented two of Monterrey's eight hits.  Pedro Villareal pitched a scoreless ninth and tenth for the Toros to earn the win.  Marco Rivas gave up Tijuana's first two runs in the eleventh to absorb the loss for Monterrey.

One interesting aspect of the series was attendance at the 27,000-seat Estadio Monterrey.  The Sultanes lead all of Minor League Baseball in attendance with a 12,047 average per opening and drew 27,529 over the three-game series with Tijuana (all played in triple-digit temperatures), but only 5,232 turned out for Tuesday's game while 6,858 were on hand Wednesday before 15,439 were in the stands for Thursday's finale.  One Puro Beisbol columnist mentioned earlier this week that the Sultanes have regularly given away tickets this season to put more backsides in the seats, but were not giving out free ducats for the tilts with the Toros.  No word on whether the house was papered for the Thursday night game, but it serves as a cautionary tale for teams in any sport who let people into their games for free and hope to make more money on concessions and merchandise sales: After people get used to attending your games for nothing, you run the risk that they'll eventually believe that's what your games are worth.

The Toros will move on to Monclova Friday for a three-game series with the Acereros while the Sultanes welcome the Mexico City Diablos Rojos for a weekend set in Monterrey.
Posted by Bruce Baskin at 8:35 AM

I didn't realize all those guys had played in SLC. I caught a game in Tacoma a few weeks ago and there were lots of familiar names on the Bees roster that day: Dustin Ackley, Huston Street, Doug Fister, Michael Bourn and Manny Banuelos.

I lived in Seattle for about 10 years and have fond memories of Seattle/Tacoma baseball. In 1994 a friend suggested as an alternative to watching baseball played on an astroturfed football field inside a dismal concrete dome, we drive down to a real baseball park. Sitting outside and watching the Tacoma Tigers play in the shadow of Mt. Rainier got me hooked on minor league baseball.

We endured the confines of the Kingdome to watch the Big Unit pitch a complete-game, 9-inning, 3-hit, 1-run, win against the Angels for the 1995 AL West tiebreaker. And we watched in open-mouthed amazement as jubilant fans burst onto the field after Tim Salmon struck out looking.

I remember how incensed my friend was when the Ms traded Derek Lowe and some light-hitting AA catcher named Jason what's-his-name to Boston, in exchange for Heathcliff Slocumb.

After I moved here, I was feeling a bit homesick one day and remembered Salt Lake had a AAA team. And here I am, 19 years later still watching the next generation of Mariners and Angels.

I remember the Slocumb trade VERY well. I was vacationing on the Washington coast, having a nice, quiet Sunday morning drinking coffee and looking across the dunes at the Pacific Ocean when an Aberdeen radio station newscast mentioned that the M's had traded Lowe AND Varitek to Boston for Heathcliff. So much for peaceful and quiet. I never get that upset over baseball but I literally screamed a four-letter word when I heard that.

You might have a hard time recognizing Cheney Stadium in Tacoma now. They did a renovation a few years ago and it looks like a big box store from the outside. Replaced the foul territory bleachers with picnic tables on one side and a grass berm on the other AND removed the roof over the grandstand (because it never rains in Tacoma, apparently). It's nicer now, but soulless.

we watched in open-mouthed amazement as jubilant fans burst onto the field after Tim Salmon struck out looking.