Mexico City ballpark to be ready by July, Diablos will wait to play in it 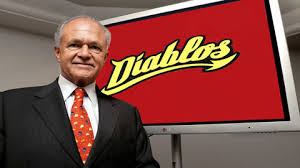 Construction of Mexico City's new 13,000-seat ballpark will apparently be completed by July and ready for occupancy, but Mexico City Diablos Rojos owner Alfredo Harp Helu says his club will remain at 5,200-seat Estadio Fray Nano for the entire current season and open the new facility in 2018.

At a recent press conference, Harp told assembled media that he is the owner of the as-yet-unnamed stadium, which he added was costing him US$80 million, rather than the original US$60 million pricetag.  Beatriz Pereyra of Proceso said the media outlet has confirmed the cost at US$90 million and that a uniquely-shaped roof over the grandstands will cost just over US$20 by itself to erect.

While Harp may indeed be financing the ballpark and is thus its legal owner, the land it sits on within the Magdalena Mixhuca Sports City is being leased from the city.  Pereyra quoted Harp as saying, "I am the owner, not the government of the city.  I created a partnership with my family to get all the resources. There is no help from anyone, like in other cities or states. It's my family's money. The land was given through a special loan, first for 12 years but that can be renewed.  We will have to pay somehow because in the long run they stay (the government) with everything."  Harp, who Forbes magazine has listed as the 974th richest man in the world, says the city will take ownership of the facility after his passing.

Whoever owns what for how long, the new stadium will end a somewhat uncertain ballpark stuation that has existed for the second-largest metropolitan area in the Western hemisphere since the 25,000-seat Parque del Seguro Social (pictured) last hosted baseball on June 1, 2000, when the then-Mexico City Tigres topped the Diablos, 7-5, in a game that lasted until 12:34 the next morning.  Current Diablos skipper Miguel Ojeda belted the old park's last home run.  Parque de Seguro Social was eventually razed to make room for a shopping center.  The two teams inaugurated Foro Sol for baseball the following day, something that won't be repeated in 2017.

While Foro Sol is comparable in seating capacity to its predecessor, it was built in 1993 primarily as an outdoor concert venue and was never considered a "baseball-friendly" stadium during the 15 seasons it was used by the Diablos (the Tigres moved to Puebla following the 2001 season).  After announcing in 2014 that a new ballpark would be built in Mexico City, Harp moved the Diablos to Estadio Fray Nano, where he invested in renovations and expansion to 5,200 seats there.  Over the past two seasons serving as a placeholder for the team until their new digs are ready, attendance at Diablos games has been negligible at best.  Mexico's most storied ballclub has drawn just 283,004 fans to 107 home games over the past two seasons for an average of 2,645 per opening, finishing 13th in the Liga attendance derby both years.

Harp also owns the Oaxaca Guerreros, where there don't appear to be any plans to replace Estadio Eduardo Vasconcelos, a 7,200-seater opened in 1950 (although Harp has constructed a baseball academy in the southern Mexico city).  Both teams are fielding all-Mexican teams in 2017, Harp's reaction to Minor League Baseball president Pat O'Connor's ruling that there will be no limits on the number of Mexican-American players an LMB team can carry on their roster.  "At the academy," Proceso quotes him as saying, "we bring in boys at 14 or 15 years, we give them schooling, we give them everything and I do not want them sitting on the bench."  It's a somewhat ironic twist, since longtime rival Tigres owner Alejo Peralta was a very vocal proponent of Mexican-only teams in the Liga, assembling a number of such teams himself while serving as the driving force for the national baseball academy just outside Monterrey in El Carmen.
Posted by Bruce Baskin at 8:02 AM