Three longtime infielders whose careers have taken them on different paths are all playing their final seasons of professional baseball this season in the Mexican League, two of them on the same team.  Alfredo Amezaga and Oscar Robles are wrapping up with the Tijuana Toros while Heber Gomez is finishing his career with the Saltillo Saraperos. 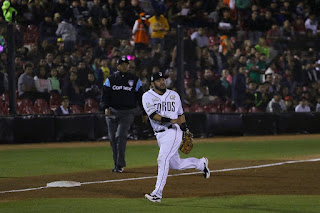 Alfredo Amezaga Becerra, who turned 39 in January, was born in Obregon, Sonora but as a boy moved to Florida, where he graduated from high school and junior college before being taken by the Anaheim Angels with the 401st selection of the June 1999 draft, one pick ahead of Albert Pujols.  The switch-hitting shortstop made his Major League Baseball debut with the parent club on May 24, 2002 against the Minnesota Twins.  Amezaga eventually bounced from Anaheim to Denver and Pittsburgh before landing back in Miami as a free agent in 2006.  Establishing himself as a utilityman (primarily an outfielder) with the Marlins, he spent four years with the team until a knee injury put an early end to his 2009 season, after which Florida let him go.  Amezaga eventually returned to both Colorado and the Marlins for stints in 2011, his final MLB campaign, and spent time in the Cubs and Dodgers systems before coming to the Mexican League in 2013 to play for Quintana Roo.

Amezaga won LMB pennants with the Tigres in 2013 and 2015 before being shipped to Tijuana earlier this month.  Amezaga hit .247 with 12 homers over nine big league seasons between 2002 and 2011 and had a .276 average with 12 homers in four Mexican League seasons through 2016.  Amezaga has also spent nine winters in the Mexican Pacific League, eight in his birthplace Obregon playing on three title teams for the Yaquis.  He also represented Mexico in the 2009 and 2009 World Baseball Classics. 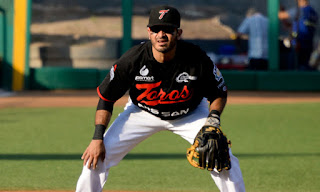 Oscar Robles Arenas was born in Tijuana in 1976 but, like Amezaga, crossed the border as a youth and graduated from high school in San Diego in 1994, by which time he'd set a career hits record for prep players in the San Diego area (which had earlier produced another pretty fair batsman named Ted Williams) and had his jersey number retired...as a pitcher.  Robles was drafted by the Astros in the third round that June and used part of his signing bonus to purchase a scoreboard for his high school's baseball field.  He spent five summers in the Astros system as a middle infielder and reached as high as Class AAA before his last season with the organization in 1998.

Robles eventually landed in Mexico City in 2000, playing one game for the Diablos Rojos before being shipped to Oaxaca.  After three strong seasons on loan with the Guerreros, Robles returned to the nation's capital and was hitting .390 for the Diablos in 2005 before the Dodgers purchased his contract.  He ended up playing 110 games in Los Angeles that summer, hitting .272.  However, Robles was back in the minors the next season and was let go by the Dodgers in 2007.  After spending time with San Diego that year and later in the Phillies system, he returned to the Mexican League for good in 2009, playing for the Diablos and Oaxaca (both teams are owned by Alfredo Harp Helu) before ending up in Tijuana in 2015.  Robles hit .260 and homered five times in three MLB seasons and his 17-year Liga career includes a .317 average and 114 homers.  Robles has also played 12 winterball seasons with Navojoa, Mexicali and Culiacan, batting .289.

Heber Gomez Contreras (b. 1977 in El Carnizal, Veracruz) has taken a less-travelled path than either Amezaga or Robles.  He is one of the earliest products of the Mexican League's baseball academy near Monterrey to make good, debuting with the Tabasco Olmecas in 1996.  Except for a ten-game stint with Chattanooga in 2001, Gomez has remained in Mexico throughout his pro career.  He played for the Olmecas through the 2002 season, after which he was traded to Monterrey.  That began a 14-year stint with the Sultanes during which he became one of the Liga's premier shortstops and earned the nickname "Super Heber" among fans and scribes.  Never a power hitter (Gomez' 13 homers with Tabasco in 2000 was the only time in his career that he's reached double figures in roundtrippers), the six-footer earned his reputation as a strong fielder, timely hitter and steady veteran who could be counted upon in the clubhouse as well as the playing field.

Gomez has also been a constant MexPac presence with Mazatlan, spending the past twelve winters with the Venados, who retired his number 34 in 2015.  His career numbers in 22 Mexican League seasons include a .288 batting average on 1,857 hits (including 98 homers).  Gomez' winterball totals show a .271 average with 25 homers, but this is a guy whose value can't be quantified by digits.  That's why it was a shock to many observers when the Sultanes shipped him to rival Saltillo in the offseason, making the current season the first time since 2002 that there's been any letter but "M" on his cap.  He's batting .241 after 15 games with the Saraperos this year.  After the season, Gomez plans to return home to Veracruz, where he already has business interests with his father, and says he'll likely put baseball in his rearview mirror.

Composing this post has been somewhat bittersweet for me.  When I started writing a Viva Beisbol column about Mexican baseball for OurSports Central in 2005 (those stories are archived on the OSC site), all three of these players were entering their respective early baseball primes on both sides of the border.  Although I started doing this as a one-season creative outlet while I was "between" radio jobs in Wenatchee, Washington, something about baseball in Mexico put a hold on me and even though I've taken a couple breaks from VB and BBM, the grip remains.  Also in 2005, my mother was still skiing and traveling at age 78 and generally kept a schedule in retirement that someone 20 years her junior would've have had a hard time keeping up with.  I know I sure had a hard time keeping track of where she was at times.

As some of you who've been reading my posts and newsletters for a few years know, I went on a hiatus in 2012 from Baseball Mexico in part because Mom's health had taken a turn for the worse and it was more important to devote more attention to helping her.  After she was given 1-2 weeks to live by an assessment nurse later that year, I was preparing to say goodbye to the best mother and role model anyone could ask for.  Instead, she pulled off a miracle and (at 85) came back from her illness, in some ways becoming healthier than she'd been before.  I've had four years with Mom that I never expected, and I thank God for such a blessing.  Well, as I write this, Mom is now 90 and comatose after being admitted to the hospital last week with what has been diagnosed as brain seizures.  There will be no second miracle and I'm preparing to say goodbye once more knowing this is not a drill.

That's what makes this one so HARD to write because it's all about saying goodbye.  Mexican fans are going to have to say their goodbyes (in a baseball sense) to three players who've played a combined six decades of this beautiful game.  Goodbyes are never easy when they're given to people we've come to love, no matter the context, but they must be made. We can never replace those nearest to our hearts, but the memories we have of them, whether they're of making a chicken dinner or making a double play relay, are what will keep them alive in our hearts, minds and souls long after they're gone.  Just as Mom will always be a part of my life for the rest of my own days, the likes of Alfredo Amezaga, Oscar Robles and Heber Gomez (a personal favorite of mine) will always be a part of the fabric of baseball in Mexico.  The records will always remain to verify their past presence, but the numbers will never convey what they've meant.  That's life and that's baseball.

As a postscript, I am not going to stop writing about Mexican baseball.  At worse, there may only be one Monday column per week while this is all going on in my personal life, but when I came back to produce BBM in 2015, it was for good.  I ain't goin' nowhere.
Posted by Bruce Baskin at 9:24 AM

What a great article. Keep up the great work!!

You and your mother are now in my prayer. I lost my father 2 years ago, so I know what you are going through.

Thanks to both of you. I feel like my writing's gotten into kind of a groove since the MexPac playoffs began in January. Why fight it? Just ride it. And I'm sorry about your losing your dad. I'm sitting right next to Mom in the hospital as I write this and it looks like tonight is going to be THE night. Heartbreaking as it is, she'll be free. I managed to bang out tomorrow's story tonight because my mind definitely won't be on baseball Monday...it's kind of therapeutic in a way.

Thanks again for letting me get personal here. She's not just my mom, she's my role model and hero.

My thought and prayer are with you and your family.

While Alfredo Amezaga was playing for the Salt Lake Stingers (AAA affiliate of the Angels), I got to watch him and Chone Figgins turn some of the sweetest DPs you'll ever see. Thanks for the summary and the update! Anita in Salt Lake City, UT.

Hi Anita. That WOULD be a good DP combo. Wish things had gone better for Figgy in Seattle, my old hometown, but it just never worked out.

BTW, I was in SLC for a hockey tournament years ago and loved it there. I've never seen a city so CLEAN or with streets so wide (I was told it was so the oxcarts could turn around easier).