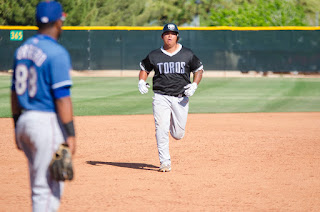 Exhibition games.  While some folks will follow them closely to try getting a handle on the chance of success for this team or that player, they're largely (and correctly) seen as little more than established veterans rounding into shape for the upcoming regular season, prospects trying to impress the coaches and front offices as managers try to determine who'll be able to help his team the most while figuring out their 25-man roster.  Even so, it's pretty hard to look at what the Mexican League's Tijuana Toros have done on the field this month playing against Major League Baseball teams while training in Tucson, Arizona and not be impressed.

The Toros are coming off a 2016 campaign during which they rose from their third-place finish in the Northern Division standings to reach the championship series before losing to Puebla in six games.  Tijuana was expected to be one of the favorites in the LMB North in 2017, but it's hard to imagine even manager Pedro Mere expected his team to reel off five straight wins against MLB teams during the preseason amid an overall seven-game winning skein, including Sunday's 8-7 triumph over Texas in ten innings at the Rangers' spring training home in Surprise.

The Rangers took an early lead in Sunday's contest when Frandy De La Rosa launched a three-run homer in the bottom of the first inning off Tijuana starter Mark Serrano, a former Reds and Diamondbacks minor leaguer. Chris Valencia's two-run single to left in the top of the third closed Tijuana's deficit to one run.  Texas prospect Luis La O, who compiled a career .329 average in the Cuban National Series before signing with the Rangers in January, punched a two-run single in the bottom of the fifth to stretch the Rangers' advantage to 5-2, but the Toros fought back with four runs in the top of the eighth (including a Valencia two-run double) to take the lead.

Texas score twice more in the bottom of the frame to regain the advantage, which held through the top of the ninth, but the two teams agreed to an elongated game so players could get a little more work in, which gave the Toros one more chance in the top of the tenth that they took full advantage of.  After Isaac Rodriguez got on board by singling off Rangers reliever Ariel Jurado, former Arizona State catcher R.J. Ybarra (pictured) socked a two-run roundtripper to give Tijuana an 8-7 lead and Toros reliever Jason Urqiudez shut out the Rangers in the bottom of the tenth to close out the win.

The victory gives the Toros an 8-1 preseason record, including three wins over the Rangers, two against Korea's NC Dinos (who are also training under Arizona skies) and single wins versus the San Diego Padres and Los Angeles Dodgers.  Tijuana clobbered the Dodgers, 6-1, Friday in Glendale as first baseman Cyle Hankerd swatted a two-run longball to give the Toros a fourth-inning lead they would open further as the game progressed.  The only TJ exhibition loss was a 7-4 defeat at the hands of the Oakland A's on March 8 in Mesa.  The Toros have two more preseason games scheduled against big league teams this week when they take on the world champion Chicago Cubs in Mesa Wednesday before playing the Cincinnati Reds Friday in Goodyear.  It should be noted that Tijuana's success has come against teams in minor league camps (as opposed to the 40-man rosters on the big league squads) and most opposing players are ticketed for AAA and AA affiliates, but the Toros ARE defeating opponents representing MLB teams and that is also worthy of mention when they represent MiLB's lone sanctioned foreign league. 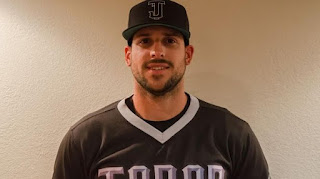 In another development for the Toros, infielder Alex Liddi has joined the team after playing for Italy in the World Baseball Classic, hitting .250 with two homers and four RBIs in four games.  The 6'4", 225-pound former Seattle Mariner, who actually played 33 games at second base for AA Northwest Arkansas in 2015 (could you imagine breaking up a double play sliding into someone that size?), played last summer with the Quintana Roo Tigres and hit .281 with 23 homers and 91 RBIs.  Liddi was the 2009 California League MVP and played in three Futures Games as a Seattle farmhand and spent parts of three seasons with the Mariners between 2011 and 2013, batting .208 with six homers and 16 RBIs over 61 games playing first base, third base and left field.
Posted by Bruce Baskin at 9:17 AM