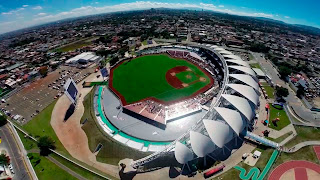 Mexico stood three outs away from posting a 9-5 win over Italy in the opening game of Pool D play in the 2017 World Baseball Classic in Guadalajara Thursday.  Instead, the Italians scored five times without suffering a single out in the bottom of the ninth to post a 10-9 victory over the favored Mexicans.  It was a doubly bitter pill to swallow for Mexico, whose loss to Italy in the 2013 WBC first round rounded out a winless first round for the Verdes Grande, forcing Mexico to win a qualifier pool last winter in Mexicali to return for their fourth Classic.

Leadoff batter Esteban Quiroz served early notice that this wasn't likely going to be a pitcher's duel by launching former Cubs minor leaguer Alex Maestri's 3-and-1 pitch for an opposite field homer that just remained fair as it passed the left field foul pole.  John Andreoli returned the favor for Italy in the bottom of the first by detonating a Yovani Gallardo serving with a long fly that carried into the temporary stands in right-center field for a solo bomb that tied the score at 1-1.

After a scoreless second, Mexico regained the lead in the top of the third when Reds farmhand Sebastian Elizalde led off with a grounder to short that Gavin Cecchini made a bad throw to first that allowed Elizalde to reach base, then the speedy outfielder came all the way in to score on a Quiroz double to right.  The Mexicans made it a 4-1 advantage with two more runs in the fourth on a Japhet Amador solo homer to left center off reliever Tiago Da Silva (a Brazilian who split last summer in the Mexican League between Carmen and Aguascalientes) and an Elizalde single off Da Silva that drove in Efren Navarro from second.

Not to be outdone, Italian cleanup hitter Rob Segedin jolted Gallardo with a two-run homer in the bottom of the fourth, followed one out later by a solo bomb from Indians free agent signee Chris Colabello, whose blast pinged off the top of the stands in right field to tie the contest at 4-4.  Switch-pitcher Pat Venditte replaced Da Silva in the top of the fifth and immediately ran into trouble.  Pitching lefty, he plunked leadoff batter Quiroz and coughed up a single by Alex Verdugo.  After pitching righty to strike out Brandon Laird, Venditte went southpaw again to get Adrian Gonzalez to fly to Segedin in left for the second out.  Going righty again, he allowed an Amador single to load the bases, walked Navarro pitching lefty to push Quiroz in from third, and then let up a Luis Alfonso Cruz double to left as a right-hander that plated both Verdugo and Amador to give the Mexicans a 7-4 lead.

Mexico manager Edgar Gonzalez brought Fernando Salas in to replace Gallardo in the bottom of the fifth. Leadoff hitter Drew Butera greeted Salas with a two-strike homer that brought Italy to within two runs, but Mexico scored twice more in the seventh to make it a 9-5 contest after Elizalde's bases-loaded single brought in both Amador and Chris Roberson.  From that point, Joakin Soria pitched a shutout seventh and Sergio Romo blanked Italy in the eighth, but Blue Jays star Roberto Osuna ran into all kinds of problems trying to close out the win in the bottom of the ninth.

Francisco Cervelli led things off by stroking a 3-and-1 Osuna pitch up the middle for a double, then was replaced by pinch-runner Sebastian Poma.  Colabello rapped a first-pitch double to send Poma over to third, followed by yet another double by Alex Liddi to score both Poma and Colabello to close the gap to 9-7.  Butera chopped a grounder to short that Cruz couldn't handle to move Liddi to third, putting runners at the corners with no outs.  Drew Maggi worked Osuna for ten pitches before getting a full-count walk to advance Butera to second.

Manager Gonzalez had seen enough and waved veteran Oliver Perez in to pitch to Brandon Nimmo with the bases full and nobody out.  Nimmo lined Perez' fourth delivery into right field to score Liddi, bringing the Azzurri to within a run.  Andreoli stepped up next and sent a grounder that eluded second baseman Luis Urias as Liddi scored from third and Maggi streaked in from second to score the game-winner for Italy.

Verdugo had three of Mexico's 13 hits while Quiroz, Amador, Navarro and Elizalde each had two hits.  Andreoli's homer and single resulted in three runs driven in while Colabello's homer and double produced two more.  Blue Jays prospect Jordan Romero pitched a scoreless ninth for the win while Osuna was burdened with the loss for Mexico, who have Friday off before playing Puerto Rico Saturday night at 8:30PM CT (0330 UTC).  Miguel Angel Gonzalez will start for the host team.
Posted by Bruce Baskin at 12:00 AM