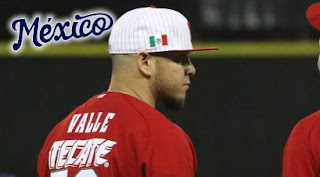 Friday night's "Battle of the Eagles" between the Mexican Pacific League champion Mexicali Aguilas and Venezuela's flag-bearing Zulia Aguilas was a knucklebiting pitcher's duel throughout.  However, the contest ended with a clap of thunder when Mexicali's Sebastian Valle (a reinforcement catcher from LMP finalist Los Mochis) pole-axed a full-count pitch for a grand slam home run to hand Mexicali a 5-1 win in a Day Three-ending thriller at Culiacan's Estadio Tomateros.  With the win, the MexPac champs punched their ticket to the Caribbean Series Final Four as the club from Baja California Norte continues their quest to be the fifth CS champ from Mexico since 2011.

This one had fans on the edge of their seats from the beginning.  Mexicali's Barry Enright and Zulia's Carlos Hernandez swapped zeros through the first two innings before the Venezuelans struck for a run in the top of the third.  Jonathan Herrera poked an 0-and-2 Enright delivery into left field for a leadoff single, followed by a first-pitch groundout by Ali Castillo that moved Herrera into scoring position.  After Freddy Galvis struck out when Mexicali catcher Valle snagged a Galvis foul tip for strike three, Jose Castillo poked a single up the middle to drive Herrera home from second to give Zulia a 1-0 lead.  Valle led off the bottom of the third with a line-drive double to center and reached third on Isaac Rodriguez' sacrifice bunt, but died 90 feet away from paydirt when Chris Roberson and Jason Bourgeois (two of Thursday night's heroes) both flew out to end the inning.

Neither team advanced a rare baserunner to second from that point until the top of the sixth when Zulia's Rene Reyes drew a two-out walk from Manny Barreda (a surprise pick by Mexicali manager Roberto Vizcarra to relieve Enright after the fifth) and scooted third on Alex Romero's single.  As Jesus Flores was batting, however, Reyes was picked off third by a snap throw from Valle for the receiver's second big play behind the plate of the night.

Mexicali finally broke through in the bottom of the sixth.  Bourgeois stroked a one-out single off Hernandez and, one out later, sped around the bases to score from first on C.J. Retherford's single, beating the throw to the plate from Zulia leftfielder Jose Pirela to tie the contest.  Retherford advanced to second on the throw. Hernandez issued an intentional walk to Luis Juarez to set up a force at any base for the final out.  Zulia manager Lipso Nava (whose return next winter was announced this week) came out and replaced Hernandez with Romulo Sanchez.  Ronnier Mustelier topped a roller to deep short that Galvis was unable to make a play on for an infield single to load the bags, but Sanchez struck out Agustin Murillo on four pitches to kill the rally.

The game continued with no further nudging of the scorer until the fateful bottom of the ninth.  Incoming Zulia reliever Pedro Rodriguez started out with two strikes on Juarez, who rapped pitch number three through the right side of the infield for a single.  Mustelier followed by laying down a bunt, which Rodriguez picked up and threw to second to force Juarez.  Instead, the throw sailed into center field, allowing Juarez to continue to third while Mustelier was safe at first.  Vizcarra sent in Jesse Castillo to pinch-hit for Murillo and was rewarded when Castillo finagled a walk on five pitches.  That brought up Valle, who was 1-for-3 on the night.  The Mariners minor leaguer fell behind 1-2 in the count before working Rodriguez into a full count before sending the payoff pitch sailing into left field bleachers to end the game, sending the 24,065 mostly-partisan fans in the overflowing stands into a state of ecstasy as the Mexican champions tightened their grip on first place in the CS standings.

Although Enright (5 IP, 1 R, 1 H, 5 K) turned in Mexicali's third outstanding start in as many nights, it was longtime MLBer Oliver Perez (a son of Culiacan) who got the win after tossing a scoreless ninth on another Vizcarra hunch as Sergio Romo and Jake Sanchez both received a second straight night off.  Zulia starter Hernandez (5.2 IP, 1 R, 5 H, 3K) matched Enright's work and certainly pitched well enough to win, but it was the luckless Rodriguez (who never did retire a batter) who was tagged with the loss.  Valle, Bourgeois and Juarez each had two of Mexicali's eight hits while Romero went 3-for-4 for Zulia.

Mexicali has a perfect 3-0 record and a semifinals berth going into into Saturday's bye.  As for Sebastian Valle, he has a night he'll share memories of with his grandsons years from now.

First baseman William Saavedra had three hits, including a two-run homer, and starter Vladimir Garcia allowed one run over six innings as the Granma Alazanes took it to the Caguas Criollos, 6-1, in Friday's opening game in Culiacan.  The win clinched a semifinal berth for the Cubans while the winless Puerto Ricans will have to win their final round robin game Saturday against Licey to even have a chance at the Final Four.

Granma (named after a Cuban province and not the national newspaper, as earlier reported) took a 1-0 lead in the bottom of the second when Denis Laza reached first after grounding into a fielder's choice, stole second and scored on Carlos Benitez' single off Caguas starter Jarret Leverett.  The Criollos knotted the game up in the top of the third, with Jonathan Morales plating a run on Eddie Rosario's sacrifice fly to center.

The Alazanes broke the game open by posting three runs in the bottom of the third.  Alfredo Despaigne singled in one run, another came in on Saavedra's double and Benitez' sac fly to right scored the third run of the inning, giving the Cuban National Series champs a 4-1 lead.  Saavedra's two-run bomb in the seventh gave Granma their final margin of victory,

Over his six innings of work for the win, Garcia allowed one run on five hits.  Leverett took the loss after being yanked with one out in the third.  The lefty from Georgia Southern let in four runs on six hits and a walk.