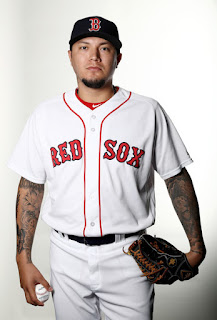 Mexican Pacific League Pitcher of the Year Hector Velazquez has been purchased by the Boston Red Sox.  Puro Beisbol columnist Roberto Riveros says Velazquez signed with Boston over the weekend, pending a physical, and will be joining the team at their spring training complex in Fort Myers, Florida.  The Red Sox first had to negotiate with the Mexican League Campeche Piratas, who own the Obregon native's rights, prior to inking a pact with Velazquez himself in a ritual similar to the process of signing players from Japan.

Although Velazquez signed a minor league contract and will not train with the big club, Riveros believes the Baseball Mexico Winter MVP could make his way to Boston as a reliever or a fourth or fifth starter, citing that only Rick Porcello, Chris Sale and David Price have been assured spots in the rotation.  Riveros projects a four-way battle among Velazquez, Drew Pomeranz, Steven Wright and Eduardo Rodriguez.  Pomeranz appears safe as a fourth starter after going 11-12 with a 3.32 ERA and 186 strikeouts over 170 innings and 30 starts for Boston last year, so the other three mentioned may be vying for one berth.

Given his performance over the past twelve months, it would be unwise to count Velazquez out.  A six-footer who turned 28 in November, he broke into the Liga with Campeche in 2010, winning Rookie of the Year honors by posting a 6-4 record and a 2.93 ERA for the Piratas over 14 starts and 15 relief appearances.  Since then, Velazquez has exclusively been a starter, with only one appearance out of the bullpen the past six seasons.  After going 38-28 for Campeche between 2010 and 2015 (winning 11 times in both 2012 and 2014), Velazquez was loaned to Monclova last year.  In a somewhat odd campaign during which he posted 16 no-decisions in 22 starts despite averaging just under six innings per outing, Velazquez was 5-1 for the Acereros in 2016 with a sparkling 2.47 ERA (no mean feat in the LMB).  His control was much improved, as Velazquez walked only 16 batters and struck out 120 in 131.1 innings last summer.

The winter went even better as Velazquez led the MexPac with nine wins and 87 strikeouts in 85.1 innings for Navojoa, narrowly finishing second to Los Mochis' Manny Barreda in both ERA (2.32) and WHIP (1.10).  After racking up another LMP-best five wins in six playoff starts for both the Mayos and Mexicali (where he was a reinforcement pickup), Velazquez finished his winter with two strong starts for the Aguilas in the Caribbean Series, going 1-0 with an 0.82 ERA in 11 innings.  In 22 starts over the entire winter, Velazquez was 15-4 with a 2.71 ERA over 133 innings pitched, striking out 129 batters and walking 30.

Should Velazquez indeed end up playing in Boston, Riveros says he'd become the eighth Ciudad Obregon product to reach the major leagues, joining Karim Garcia and Marco Estrada among others.
Posted by Bruce Baskin at 12:00 AM