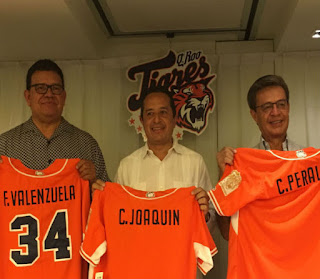 A group led by former Los Angeles Dodgers superstar Fernando Valenzuela has agreed to terms for the purchase of Cancun's Quintana Roo Tigres, one of the Mexican League's most storied franchises.  The amount Valenzuela's group is paying for the Tigres (including the team's nickname itself, which owner Carlos Peralta originally said was not for sale) was not immediately available.

During a Sunday press conference in Cancun, which will remain the team's home for the 2017 season, Peralta said, "Being sensitive to the many comments and expressions I've received from the fans, manifested in their fear that the great tradition and legacy of the Tigres may disappear, and given the opportunity and interest of a regional group of investors with proven moral quality, love for baseball and a future developmental plan for the team in the Cancun market, after careful consideration, I've decided to sell the team and the name Tigres."

Few, if any, details are available about the transaction, including the price, nor is the level of involvement of the state government known, although Quintana Roo governor Carlos Joaquin was introduced at the press conference.  Peralta was one of many LMB owners who've benefitted from state subsidies in past years, mostly among the so-called "Old Guard" ownership group that has butted heads with the "New Breed" group of owners who largely want to steer away from such arrangements.  The latter faction leans toward marketing their teams aggressively, relying on ticket and merchandise sales along with corporate sponsorships to generate revenues instead of subsidies.

It is not known which faction Valenzuela will align himself with, a crucial consideration with the two sides split almost evenly in votes during league meetings.  At the press conference, the Navojoa native said, "I'm very happy that baseball will continue.  I never imagined being in charge of an organization, let alone a team like the Tigres.  I think the fans have greatly identified with the Tigres, and I think that's a great advantage for us."

Thus, for the first time in 62 years, there will not be a Peralta heading a Liga team.  The legendary Alejo Peralta formed the Mexico City Tigres in time for the 1955 season and went on to run the franchise until his death in 1997.  The older Peralta ran his team in a similar fashion to soccer's Chivas club: A profoundly pro-Mexican organization that bypassed bringing in foreign players and putting a premium on domestic talent, often winning titles with an all-homegrown lineup.  The Tigres shared Mexico City with the Diablos Rojos for nearly five decades, creating the country's fiercest baseball rivalry.

That ended somewhat when the younger Peralta did what had been considered unthinkable by moving the Tigres out of the nation's capital, first to Puebla in 2002 and then to Cancun in 2007, but the rivalry has never truly died and there is sentiment among many fans and journalists south of the border that the Tigres should ultimately return to Mexico City.  Wherever they've called "home," the Tigres have won 18 division championships and 12 pennants, the last coming in 2015.  Although he has come under criticism at regular intervals since taking over for his father 20 years ago, the team HAS won eleven Mexican League titles under Carlos Peralta and his right-hand man, team executive president Cuauhtemoc "Chito" Rodriguez.

The LMB will hold an Assembly of Presidents meeting on Friday in Mexico City.  Now that it's been determined that there will be a 16-team league (with new teams in Leon and Durango while the Tigres are staying put in Cancun), conjuring a schedule for the upcoming season may be on the agenda since Opening Day is projected for Friday, March 31.
Posted by Bruce Baskin at 12:00 AM