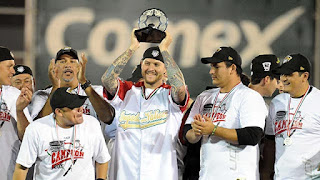 Travis Blackley tossed eight shutout innings and Chad Gaudin closed out both the game and season as the Puebla Pericos defeated Tijuana, 2-0, Wednesday night in TJ to win the Mexican League Championship Series and claim Puebla's fifth LMB pennant.  A packed house of 17,893 was on hand at Estadio Gasmart to witness Game Six of the Serie del Rey.

Blackley, a former major league hurler from Australia, only allowed singles by Dustin Martin and Roberto Lopez while striking out six and walking two to post his third playoff win of 2016.  He was named Playoff MVP by the Liga following the contest.  This might not even be the highlight of the 33-year-old lefty's past year...Blackley married American model Jenna Cecil in the offseason, with no apparent deleterious effect on his stamina (football coaches, take note).

The game was a pitcher's duel from the onset, as Tijuana starter Barry Enright matched Blackley, zero for zero, until serving up a two-out homer to Puebla first baseman Daric Barton to center field in the top of the sixth inning.  Enright lasted 6.2 innings, scattering seven hits and walking one while striking out five Pericos batsmen in absorbing a loss he really didn't deserve.  After Jose Meraz replaced Enright (who'd thrown 103 pitches) to record the final out of the seventh, Juan Sandoval took the hill for the Toros and pitched a scoreless eighth.

Sandoval, a 35-year-old Dominican righty who pitched well for Tijuana after being released by Mexico City in late June, opened the top of the ninth by letting up a leadoff double to Sergio Perez, who lined a 1-1 pitch into left field.  It looked like the Toros might escape their predicament when Alberto Carreon grounded out and Rudy Amador struck pout swinging, but Nyjer Morgan's sharp grounder up the middle into center scored pinch-runner Oscar Sanay from second to make it a 2-0 Puebla lead.  The threat ended one pitch later when Morgan lit out to steal second but was nailed by a perfect throw from Toros catcher Juan Apodaca to second sacker Carlos Valencia for the third out.

It was then left to Gaudin, who pitched for nine MLB teams between 2003 and 2013, to close out the game and season for Puebla in the bottom of the ninth, but it didn't go as smoothly as Pericos manager Cory Snyder hoped.  After Oscar Robles led off for Tijuana by lining out to Carreon at shortstop, Olmo Rosario legged out a bunt single down the third base line to keep the Toros' hopes alive.  Gaudin then faced the dangerous Dustin Martin, who'd already had a pocketful of postseason plate heroics for Tijuana.  After working the count to 3-2, Gaudin got Martin swinging for the second out. During the at-bat, Rosario broke for second to steal the bag, drawing a throw from Tapia.  Umpire Jesus Lopez ruled Rosario safe, causing Pericos skipper Snyder to come out of the dugout to protest the decision, but the call was upheld.  Gaudin then took matters into his own hands by whiffing Apodaca on five pitches to pick up his seventh playoff save and clinch the title for Puebla.

Ex-MLB outfielder Willy Taveras had an outstanding Serie del Rey for the Pericos, batting .458 over the six-game set, while Barton and Tapia each hit two homers for Puebla.  This series was decided by pitching, however, as the Pericos staff held Tijuana to a .199 average.