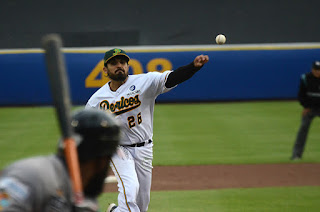 The Mexican League presented their Playoff MVP award to Puebla pitcher Travis Blackley immediately after the Aussie MLB alum tossed eight innings of two-hit shutout ball in the Pericos' pennant-clinching 2-0 win at Tijuana on September 14.   However, a different conclusion has been reached for BBM's Summer Playoff MVP.

Blackley did indeed literally save his best for last, but was also touched by the Toros for three runs in 5.2 innings in his previous Serie del Rey start and the 33-year-old made just three starts over the three-round postseason, missing the opening series against defending champion Quintana Roo altogether.

A case could be just as easily made for Pericos closer Chaud Gaudin, another former big leaguer.  Following a regular season in which he saved 33 games (second in the LMB to Monclova's Arcenio Leon's 36) with a microscopic 1.64 ERA over 44 games, Gaudin won one game and saved seven more in the playoffs for the Parrots, three in the title series against Tijuana.  Gaudin had a couple rocky postseason outings that drove his playoff ERA up to 2.53 (still a very good number), making him anything but automatic.  After analyzing the numbers for all players who made significant postseason contributions during Puebla's pennant run, BBM goes with lefty starter Mauricio Lara.

Like Blackley, Lara posted three playoff wins for Puebla.  His only blemish in four starts was a no-decision after pitching seven strong innings in the Division Championship Series against Yucatan on September 4, a game that went 13 innings until the Leones pulled out a 4-3 win.  Lara won one game in each of the Pericos' three series, allowing just four earned runs over 27.1 frames for a sparkling 1.33 earned-run average.  While he wasn't as dominant as Blackley when the latter was on his game, Lara was rock-steady every time he took the mound en route to a playoff WHIP of 1.15 and gave his teammates a chance to win all four outings.  His final start of the year came September 10 in the Serie del Rey when he let in just one run over eight frames as the Pericos held on to win Game Three, 8-5, to take a 2 games to 1 lead in the set.

The 5'11" 194-pound portsider found himself in Quintana Roo for the 2009 season, going 3-6/6.19 in 11 starts for the Tigres before being traded to Puebla that June. He's been a mainstay in the Pericos' starting rotation ever since.  Lara posted a so-so 37-34 record between 2011 and 2015 with a 5.02 in that timespan, but hit his stride this summer.  He went 13-3 for the Pericos with a 3.14 ERA to finished tied with Monclovas Josh Lowey for second in the LMB in wins behind the 18 of Yucatan's Yoanner Negrin.

While pitching almost exclusively for just two Mexican League teams since 2004, Lara has been constantly on the move during the winter in the Mexican Pacific League. Over the past ten LMP seasons, he's pitched for (in order) Navojoa, Obregon, Guasave, Los Mochis, Mazatlan and Mexicali, going 4-0 with a 1.64 ERA in 29 relief appearances for the Aguilas last winter.  Still, Lara has enough cache in the MexPac that he was the first overall selection by Culiacan in June's annual LMP draft of domestic players.  The Tomateros will host the 2017 Caribbean Series at their year-old ballpark in February.  The LMP regular season opens October 11.
Posted by Bruce Baskin at 12:00 PM