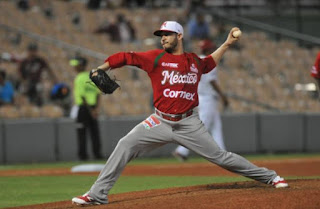 Rodriguez needed to be sharp as Tigres starter Vladimir Banos matched him over the first three innings, allowing two hits and no walks while retiring nine of the first eleven Mazatlan batters he faced.  Then came the fourth inning, in which the Venados pushed three runs across the plate to break the deadlock.  Banos gave up a leadoff double to Alex Liddi, then walked Cyle Hankerd and Jorge Vazquez to load the bases with nobody out.  Betancourt then punched a single to left to bring in Liddi from third with the game's first run, enough for Ciego de Avila manager Roger Machado to yank Banos and bring in Livan Moinelo from the bullpen.

That strategy backfired when Moinelo walked Esteban Quiroz on four straight pitches, forcing Hankerd in with Mazatlan's second run.  Yander Guevara replaced Moinelo and got Erick Rodriguez to ground into a 4-6-3 double play as Vazquez lumbered in from third to stake the Venados to a 3-0 lead.

Mazatlan scored once more in the bottom of the sixth as Vazquez and Betancourt singled to lead things off.  After Vazquez was forced out at third on a Quiroz bunt, Rodriguez drove in Betancourt from second by singling to left, making it a 4-0 game.

Terance Marin took over for Rodriguez in the top of the seventh after the latter issued a leadoff walk to Yoelvis Fiss.  Guillermo Avilles cracked a liner that was deflected by Marin's glove to short, where Betancourt was unable to make a play as Fiss moved to second and Avilles crossed first.  Osvaldo Vazquez then lined a single to left that brought Fiss to bring the Cubans to within two runs.

The Mexicans blew the game open in the bottom of the seventh.  After Chris Roberson led off with a double, Ciego de Avila reliever Yalfredo Dominguez intentionally walked Hankerd to fill the open sack at first and pitch to Vazquez, another strategy backfire when Dominguez hit Vazquez on an 0-2 pitch to load the bases for Betancourt, who smoked the first pitch he saw for a three-run double to center to give the Venados a 7-1 advantage.

The Tigres got one run back in the eighth when Alfredo Despaigne doubled Yulieski Gourriel in from first and after Esmailin Caridad walked both Lourdes Gourriel Jr. and Avilles to load the bases with two out, Jake Sanchez replaced Caridad on the hill for the Venados and struck out Vazquez on four pitches to end the inning and the Cuban threat.  Steven Hensley then pitched the ninth and, after walking Yulieski Gourriel and walking Despaigne with two out, battled Ariel Borroto for eight pitches before getting a swinging strikeout to end the game and clinch a spot in Sunday's title game.

Rodriguez earned his second win of the Caribbean Series for Mazatlan while Banos fell to 0-2 in the CS-ending loss for the Tigres.  Eddie Gamboa, who threw five decent innings in the Venados' Game Two win over Ciego de Avila Tuesday, is the scheduled starter for Sunday's championship game against Aragua.  The Venezuelan club dominated Puerto Rico's Santurce Crabbers, 13-3, in Saturday's earlier semifinal as the Tigres' Jose Martinez singled twice, tripled, homered and drove in four for Aragua.  Former MLB All-Star Freddy Garcia is the likely starter for manager Eddie Perez' Venezuelan League champs.
Posted by Bruce Baskin at 8:47 PM