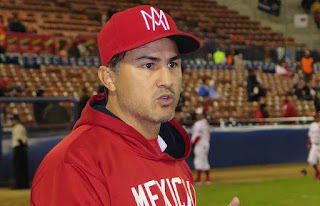 A four-team World Baseball Classic qualifying tournament will be held in Mexicali's El Nido ("The Nest") ballpark next month and the Mexican Pacific League's Mexicali Aguilas are preparing to host the four-day event.

Mexico's national team, conveniently managed by Aguilas skipper Edgar Gonzalez (pictured), will take on sides from Germany, Nicaragua and the Czech Republic from March 17 through 20 at the 19,500-seat facility.  The WBC qualifier will be a double-elimination tournament for the first time after a double round-robin format had been used in the past, with a March 20 winner-take-all final to determine the qualifier for next year's WBC.  Mexico has qualified for all three Classics since its 2006 inception, but was bumped into the qualifiers after finishng last in their pool at the 2013 event.  They will be the favorites at Mexicali going in.

Australia has already won a qualifier tournament at Sydney, knocking out New Zealand, South Africa and The Philippines last weekend.  Panama City will host a qualifier concurrent with Mexicali's festivities, with host Panama taking on Colombia, France and Spain while national teams from Israel, Brazil, Great Britain and Pakistan will gather in Brooklyn, New York for the fourth and final qualifier in September.  The four qualifying teams will join twelve others to form the 16-nation field for next year's WBC.

This will mark Gonzalez' first time managing the Mexican National Team after playing second base at the 2009 and 2013 Classics alongside brother Adrian, currently a Dodgers All-Star first baseman.  In his first winter managing in the LMP, Edgar led the Aguilas to a 38-29 regular season record before advancing through the playoffs to the championship series, where Mexicali lost in five games to eventual Caribbean Series titlist Mazatlan.
Posted by Bruce Baskin at 2:17 PM