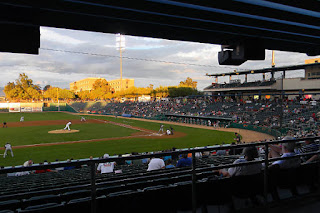 Although Tucson, Arizona has been without its own professional baseball team since the San Diego Padres moved their AAA Pacific Coast League affiliate to El Paso after the 2013 season, that doesn't mean the city of 528,000 has been devoid of the game itself.  Quite the opposite, in fact. The Tucson Invitational Games have become a prominent February and March destination for small college baseball teams from across the country, often with 18 games played daily as eighty schools will play there this year.  More proof of how baseball in Tucson has evolved after the PCL's departure will be on display next month when three Mexican League teams hold their training camps at the Kino Sports Complex, which also hosts the TIG.

The Tijuana Toros will arrive for a 30-day stretch on Friday, February 26 while the Veracruz Rojo Aguilas and Puebla Pericos will come to town for their own month-long stays on Tuesday, March 1. According to complex events manager Sallyann Wassmuth, two exhibition games have been scheduled at 11,000-seat Kino Veterans Memorial Stadium (formerly known as Tucson Electric Park): The Toros will welcome the German National Team on Wednesday, March 9 for a tuneup prior to the World Baseball Classic qualifier in Mexicali, followed by a contest between the Toros and the Texas Rangers AAA squad three days later.  Both contests are scheduled for 6PM Mountain Time.

Pima County Stadium District director Maureen "Reenie" Ochoa, who oversees the 155-acre complex, says, "We are most delighted to host our visitors from Mexico at the Kino Sports Complex for the Mexican Baseball League training camps and will be encouraging the many residents of Pima County to stop by the ballpark to watch some very fine players and teams in action.  Baseball is alive and well at the Kino Sports Complex."  Ochoa adds that given the uncertainty regarding several aspects of the two games, "we are going to open the gates for anyone who wishes to enjoy a nice day or evening at the ballpark."

Besides the ballpark, the Kino complex (named after Italian Jesuit priest Eusebio Kino, who established 24 missions between Sonora and Arizona at the dawn of the 18th century) includes seven full-sized practice baseball fields, two practice infields and numerous batting cages in addition to several soccer fields and four clubhouses.

This will not be the first time in Tucson for Mexican baseball teams.  The same three teams coming this year were joined by the Campeche Piratas last year while the fall Mexican Baseball Fiesta involving Mexican Pacific League teams playing preseason games originated in Tucson in 2011 and is now held in four cities across the American southwest every October.  The result has been the establishment of a beachhead of sorts for Mexican baseball in Tucson, whose metro population of just over a million people includes over 350,000 residents of Hispanic heritage.

Although pro baseball in Tucson dates to 1915, the sport has had a somewhat spotty history there.  Tucson usually had a franchise in the Class D Arizona-Texas and Arizona-Mexico leagues between 1928 and 1958, when the widespread contraction plaguing minor leagues at the time finished off the circuit.  After an absence of ten years, the AAA Pacific Coast League placed a team at Hi Corbett Field in 1969.  The PCL remained in town for four decades until the team moved to Reno following the 2008 season.

After a pair of disastrous seasons in the independent Golden League, Tucson was back in the PCL in 2011 when San Diego moved their displaced Portland affiliate to Optics Valley for three lame-duck summers before resettling (again) their AAA club in El Paso.  The Padres averaged 3,145 fans per game in 2013, their last year in Arizona.  The city was also a MLB spring training site for decades and has hosted teams in both the Arizona Rookie League and Arizona Fall League.
Posted by Bruce Baskin at 9:00 AM