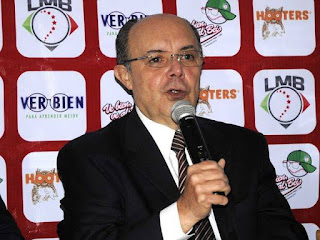 The Mexican League's Assembly of Presidents met in Mexico City Monday to discuss a number of issues the league is facing in 2016.

Perhaps the most pressing was replacing league president Plinio Escalante (pictured), who announced his retirement effective at the end of the upcoming season after sitting behind the big desk since replacing Alejandro Hutt in 2007.  The dilemma essentially solved itself when Escalante agree to serve two more years in office, moving his exit down the road to 2018.  Although the LMB has tended to sputter along during Escalante's reign while the while the Mexican Pacific League has exploded in both attendance and presence in recent years, the Yucatecan has provided a measure of stability during his nine years at the helm at the Liga's Mexico City headquarters.  Escalante met with LMB directors for two hours Sunday night hammering out details of his extension prior to Monday's announcement.

Introduced at Monday's session was Javier Balseca Gonzalez, the Mexican League's new director of marketing and merchandising.  Balseca, who was hired to the post in January, gave a presentation to Liga leaders whose 16-team league drew 3.87 million fans in 2015 for an average of 4,565 per opening. Conversely, the AAA International League pulled in 7,199 per contest while Pacific Coast League teams welcomed 6,508 people through the turnstiles per night.  The Mexican Pacific League led all non-MLB leagues in the hemisphere with a regular season average attendance of 9,670.

The team presidents also discussed moving the date of the Liga's 2016 All-Star Game in Monterrey, which was originally scheduled for May 29, a date that coincides with Mexican soccer's Premier Division championship game.

Finally, Laguna Vaqueros CEO Carlos Gomez del Campo told his peers the Torreon-based team is in the process of finding new partners, a topic that was tabled until the Assembly's September meeting in Oaxaca. The next such gathering is scheduled to take place May 27 in Monterrey during All-Star Weekend but, as noted above, that may change.
Posted by Bruce Baskin at 10:51 AM