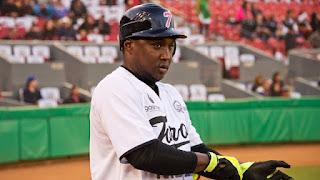 Betancourt spent the MexPac regular season with the Mexicali Aguilas, for whom he finished 12th in the MexPac batting race with a .298 average, came in second to Jalisco's Japhet Amador in home runs with 12 and finished second in the LMP with 126 total bases, two behind Navojoa's Quincy Latimore, while playing both first and third base over 63 games for manager Edgar Gonzalez' Eagles.  He then hit .288 for Mexicali in 16 postseason games as the Aguilas reached the championship series against eventual LMP champion Mazatlan, who picked him up for the Caribbean Series, where he rewarded the Venados by batting .438 and scoring or driving in 14 runs in five games during their unbeaten run to the CS title in Santo Domingo.

It was a far cry from when the 34-year-old Cuban began the winterball season in October just trying to regain his mojo after hitting .250 in 21 games for Tijuana in the LMB last spring before being released in April.  Betancourt has bounced around a bit the past two summers after spending the 2013 campaign starting at shortstop for Milwaukee, batting just .212 with 13 homers in 137 contests.  He signed a one-year deal with Japan's Orix Buffalos in 2014, but was let go on May 14 that year after hitting .141 in 28 games.  That was followed by last season's short stay in Tijuana.  Entering the LMP season, his future in pro baseball was in doubt.  Now he'll have a chance at redemption of sorts in Cancun, where he'll vie for a roster spot on skipper Roberto Vizcarra's champions.

The question moving forward is where Betancourt will fit in with the Tigres, who have a veteran-packed infield featuring longtime LMBers Carlos Gastelum, Jorge Vazquez, Rolando Acosta and Kevin Flores plus ex-Marlins infielder Alfredo Amezaga.  With his ability to play all four infield positions (albeit little time spent at second base), the versatile Betancourt could land a spot as a utility player, where the 38-year-old Amezaga may be the most vulnerable.

The Tigres added yet another Cuban exile in 44-year-old pitcher Jose Contreras, a 2006 All-Star with the Chicago White Sox amid a four-year stretch in which he won 51 games for the Yankees and Chisox after making his 2003 debut at age 31 for New York.  He beat Roger Clemens and the Houston Astros, 5-3, in the opening game of the 2005 World Series, won by Chicago.  His MLB career record over all or parts of eleven seasons was 78-67 with a 4.57 ERA, last pitching for Pittsburgh in 2013.

No word on whether his contact with Quintana Roo will affect Contreras' Social Security eligibility in the States.
Posted by Bruce Baskin at 9:07 AM