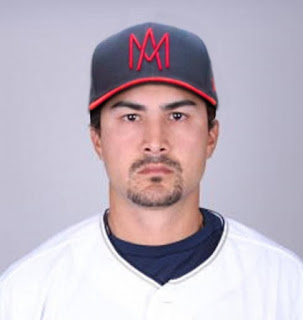 It took Edgar Gonzalez nearly a decade's worth of persistence to finally get a shot to play Major League Baseball, but his return to a big league dugout as a coach may not be so protracted a journey.  In his first managerial job since retiring as a player after the 2014 season, the former San Diego Padres and Yomiuri Giants infielder led Mexicali to a first-half title and advanced to the Mexican Pacific League championship series, earning the Baseball Mexico Winter Award for Manager of the Year.

Gonzalez was handed the reins for the Aguilas in the offseason and guided them to a 38-29 mark and two playoff series wins before running into a peaking Mazatlan team in this season's title bout, losing in five games to the Venados.  He steered the team with a steady hand as the Eagles played consistently well throughout the winter with no debilitating slumps.

Mexicali led the LMP with a .295 team batting average, with five players topping the .300 mark and another two hitting in the upper .290's, a figure not uncommon in the summer Mexican League, long a notorious hitter's circuit, but something rarely seen in the MexPac (historically a pitcher's league).  The Aguilas acquitted themselves well on the mound, too, finishing third in the loop with a 3.51 ERA and leading all eight teams with seven shutouts, a 1.30 WHIP and 502 strikeouts.  Although the batting fell off in the pitching-dominated playoffs with a .246 average (no team hit higher than .252), the hurlers stepped it up with a sparkling 2.30 ERA and a stingy 1.06 WHIP over 16 contests.

The 37-year-old San Diego native will get a chance to display his acumen on a larger stage in March when he manages Mexico's national team in the World Baseball Classic qualifiers in Mexicali.  He may need all the acumen he can conjure if the Mexican League withholds players from the event and major league organizations drag their heels on making talent available for games against Germany, Nicaragua and the Czech Republic.  The WBC qualifier takes place March 17 through 20 at Estadio B-Air.
Posted by Bruce Baskin at 9:00 AM