$20 million ballpark on horizon in Mazatlan 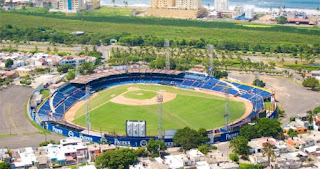 After more than fifty seasons calling Estadio Teodoro Mariscal "home," the Mazatlan Venados will be moving into a new home in the next few years.

The Venados have played 54 seasons at Teodoro Mariscal (pictured) since it opened in 1962, during which they've won nine Mexican Pacific League pennants and hosted five Caribbean Series tournaments (winning the CS crown at home in 2005).  The 15,000-seat facility is now lagging behind other new or renovated Mexican Pacific League stadiums in amenities and modern conveniences, however.  Having attended a pair of games in Mazatlan in 2010, this writer's impression was that while Teodoro Mariscal was a functional ballpark reasonably maintained by the Venados under then-GM Jesus "Chino" Valdez (a gracious host now working as the Pittsburgh Pirates' scouting director in Mexico), it was showing some wear and a bit spartan compared to the new breed of minor league ballparks that are as much about revenue as baseball.

There has been much debate in recent years among Mazeltecos whether the long-term solution was either a major Marsical renovation or a new ballpark altogether, but the question appeared settled last week after Mazatlan mayor Carlos Felton Gonzalez announced a new stadium will be built.  Guadalajara's El Informador newspaper quotes Felton Gonzalez as saying, "There is much interest among the federal, state and probably municipal governments and the Toledo family (Venados owners) and CONADE (Mexico's national sports commission)."

According to the mayor, the ballpark would cost 380 to 400 million pesos, or approximately US$20-21 million at current exchange rates. He did not give capacity figures.  The facility would be built near Mazatlan's Multipurpose Center in the La Marina area north of the city's Zona Dorado tourist area, causing concern among some Mazeltecos regarding its lack of proximity to most year-round residents in comparison to the more centrally-located Teodoro Mariscal.

The Mazatlan Messenger website says the first stone will be laid before the end of 2016.
Posted by Bruce Baskin at 10:50 AM