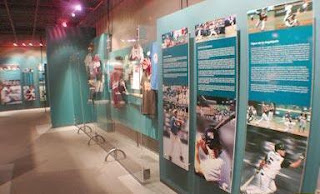 Four years after the Cuauhtemoc Moctezuma brewery booted the Mexican Baseball Hall of Fame from their grounds in Monterrey, the issue of where the pantheon would resettle has finally been solved.

The Mexican League website recently announced that a new Salon de la Fama will be erected at Monterrey's Fundidora Park.  An agreement states the Salon will largely by funded by Mexico City Red Devils owner Alfredo Harp Helu, who said that while sites in Mexico City and Oaxaca had also been considered, it was decided to keep the museum in Monterrey.  At the signing, Harp called it "a day of celebration for baseball in our country."  Thanking Harp for his role in bringing the facility back to a new life and keeping it in Monterrey, Nuevo Leon governor Jaime Rodriguez Calderon added, "We must recognize the great men and glories of baseball here."  Other dignitaries in attendance were Mexican League president Plinio Escalante, Mexican Pacific League leader Omar Canizales and Salon de la Fama director Francisco Padilla Davila.

According to architect Daniel Lopez Salgado, the new Salon de la Fama will feature domes and be split into three major areas:  a large room for both temporary and permanent displays, interactive rooms featuring a Mexican baseball time tunnel and an archive room.  There will also be an auditorium and batting cages, with underground parking beneath the entire facility.  No projected completion date has been given.

The Salon de la Fama has existed in some form since 1939, but it was not until 1973 that the original permanent museum in Monterrey opened to the public and remained open until the brewery closed it down 38 years later.  All display items have been kept boxed in storage since.
Posted by Bruce Baskin at 1:01 PM