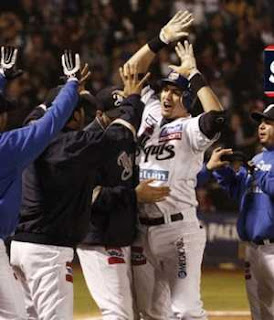 When the Obregon Yaquis dispatched the Guasave Algodoneros Wednesday night to wrap up the Mexican Pacific League finals in four straight games, they didn’t use a broom. A shop vacuum is more like it.

The Yaquis blasted the Cottoneers, 19-0, by pounding out 25 hits in front of a stunned crowd of 7,824 at Guasave’s Estadio Francisco Carranza Limon. Sergio Contreras had four hits and five RBIs for Obregon, Carlos Valencia’s four-hit night included a solo homer, Iker Franco and Alfredo Amezaga combined for six hits, two homers, five runs and five RBIs…you get the idea.

Obregon opened the contest with five first-inning runs off Algos starter Francisco Cordoba, including a solo homer by Amezaga and a three-run round-tripper from Franco, both to right field. The score remained at 5-0 until the Yaquis tacked on two more in the sixth on a Valencia homer and a Karim Garcia RBI single, but the real fireworks came one inning later.

In the seventh, Obregon sent 15 players to the plate and scored 11 runs as Valencia, Contreras and Amezaga each turned in two hits to bring the score to 18-0. It’s safe to say the only seventh-inning stretching last night was done by the Yaquis’ third base coach, who was probably waving more than the queen at a homecoming parade.

Not that it was needed, but the Yaquis received a standout start from Marco Carrillo, who won his second playoff game by tossing six innings of three-hit shutout ball, striking out six Algodoneros and walking one. The only Yaqui who conceivably could have been disappointed was closer Luis Ayala, whose only chance of earning a fourth consecutive save in the LMP finals would have been to pitch batting practice to the Cottoneers.

With the Mex Pac competition vanquished for a second straight year, the next conquest for the Yaquis will be the Caribbean Series, which begins Thursday, February 2 in the Dominican Republic. Joining Obregon in Santo Domingo will be Puerto Rican champion Mayaguez after the Indios topped Caguas, 5 games to 3, in that league’s title series. The Venezuelan League championships between Aragua and LaGuaira are tied at a game apiece while the Escogido Leones lead Cibaenas in the Domincan Series, 3 games to 1.
Posted by Bruce Baskin at 1:53 PM