Because of scheduling conflicts and needed prioritizations elsewhere (sorry to be so cryptic), Baseball Mexico will be taking the Mexican Pacific League's regular season off with plans to be back in time for the January playoffs and the Caribbean Series in February. There's no crisis or anything like that...I just don't have the time right now to do justice to this blog or newsletter. I AM happy to send a full color PDF file of the 30-page BBM 2011-12 Mex Pac Guide for free to anyone who wants a copy. It has Opening Day rosters, stadium photos, team directories, highlights and stats from last season along with profiles of each LMP city.

There are three websites you can access daily to keep up with the Mex Pac in BBM's absence: One is the MLB Caribbean Leagues page, which posts results daily and offers timely stats and standings of all four CS leagues. Second, there's Puro Beisbol, which may be the best baseball site in Mexico and a longtime source of story material for both BBM and the earlier Viva Beisbol site/newsletter. The third is the Mexican Pacific League website itself, for obvious reasons. The Puro Beisbol and Mex Pac links are to English translations...Puro Beisbol can be tricky to work with, but worth the effort.

If all goes according to plan, I should have BBM back and running at the end of December when the playoffs are just about to get underway. Again, my apologies for what will end up being about a 10-week hiatus, but sometimes even a favorite hobby like this has to take a backseat and this is one of those times. Thanks for understanding.
Posted by Bruce Baskin at 4:23 PM 2 comments: 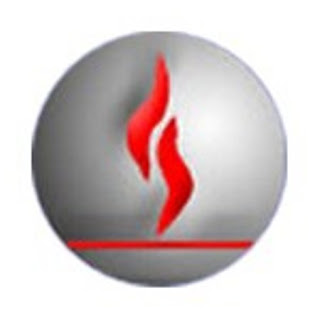 Moreno got 73 votes and Ortiz picked up 60. Also moving on to the next stage are Francisco Garcia (28), Pablo Gutierrez Delfin (26) and ex-Los Angeles Dodgers pitcher Ismael Valdez (who tied with former catching great Homar Rojas with 24 votes before outpolling Rojas 6-5 on a second ballot).

Twenty-two players received votes in Monday’s balloting. The five who earned the nod will be joined in final voting next year by Hector Heredia, Nick Castaneda, Chico Rodriguez, Antonio Pulido and former Mets catcher Alex Trevino. Three players and one writer will be selected to the Salon in 2012.
Posted by Bruce Baskin at 12:01 AM 2 comments: 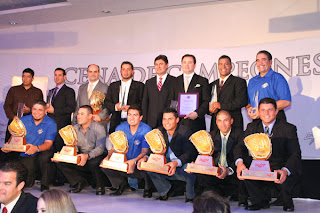 The Caribbean Series champion Obregon Yaquis hosted the Mexican Pacific League’s annual preseason “Dinner of Champions” Tuesday night in the Sonora city, at which food and awards were both served with equal relish to attendees.

Among trophy recipients from last winter, Los Mochis’ Edwin Salas earned the Melo Almada Award for Rookie of the Year, Mochis southpaw Alberto Castillo was given the Vicente Romo Award for Pitcher of the Year, Hermosillo’s Luis Alfonso Garcia took away the Ronnie Camacho Award as home run champion, Eduardo Arredondo of Guasave was handed the Matias Carrillo Award as LMP batting champion and a third Mochis player, Justin Christian, received the Hector Espino Award for Most Valuable Player.

Matias Carrillo of Guasave got the Benjamin Reyes Award for Manager of the Year while Obregon skipper Eddie Diaz was honored as the Champion’s Manager. Yaquis president Rene Rodriguez and GM Francisco Minajares were also awarded for their front office work.
Posted by Bruce Baskin at 12:01 AM No comments: 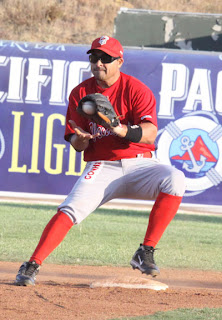 Trailing 2-1 in the top of the ninth inning, the Mazatlan Venados rang up four runs and went on to defeat the Obregon Yaquis, 5-2, Sunday afternoon to clinch the third annual Tijuana Beisbol Fest title at Estadio Cerro Colorado in the border city. It was Mazatlan's first appearance at the four-team preseason tournament.

Oswaldo Morejon (pictured), Lorenzo Buelna and Brandon Sing each singled to open the ninth for the Deer, with Sing’s singleton driving in Morejon with the tying run. Hector Paez then sliced yet another single to plate pinch-runner Jose Bernardo Lopez with the eventual game-winner.
Said Gutierrez gave the Yaquis a 2-0 lead in the fifth with a two-run homer to left, but Christian Quintero made it a 2-1 game in the seventh with an RBI single for the Venados to set up the ninth inning explosion. Mazatlan finished with a 2-0-1 record, Culiacan came in at 2-1, Obregon was 1-2 and Mexicali went 0-2-1 over the three-day, round-robin format.

On Saturday, a Home Run Derby was held with one contestant from each team: Mexican League home run champ Jorge Guzman for Mexicali, Refugio Cervantes from Culiacan, Iker Franco of Obregon and Sing for Mazatlan. Cervantes won the Derby with eight homers, while Guzman was runner-up with six.
Posted by Bruce Baskin at 3:50 PM No comments: 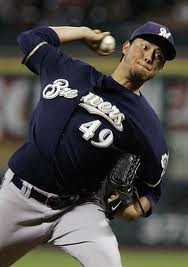 Milwaukee Brewers pitcher Yovani Gallardo (pictured) left no doubt among baseball fans Saturday that Mexico is being represented in the MLB playoffs. Gallardo, who was born in La Piedad, Michoacan in 1986, tossed eight innings of four-hit ball for the Brewers and earned the 4-1 win over the Arizona Diamondbacks, striking out nine batters and walking one in the opening game of their National League Division Series.

The right-handed Gallardo, who was 17-10 with a 3.52 ERA in the regular season, is one of five Mexican-born players performing in the MLB postseason all pitchers. Among the other four is a Milwaukee teammate, reliever Marco Estrada. Estrada, a Sonora native who attended Long Beach State, was 4-8 with a 4.08 ERA in 92 innings for the Brewers, striking out 88 hitters.

Two other Mexicano pitchers work for the St. Louis Cardinals: Starter Jaime Garcia and closer Fernando Salas. Garcia (from Reynosa) went 13-7 with a 3.56 ERA this year after finishing third in balloting for the National League Rookie of the Year in 2010, while Salas (a Sonoran) was 5-6 with 24 saves and a 2.28 ERA in 75 innings for the Cards.

The lone American Leaguer from South of the Border is Yankees pitcher Luis Ayala, a seven-year MLB veteran making New York the sixth big league city he’s hurled in since 2003. After not pitching in the majors last year, the Los Mochis-born Ayala went 2-2 with a 2.09 ERA in 52 appearances for the Yanks in 2011.
Posted by Bruce Baskin at 8:55 AM No comments: