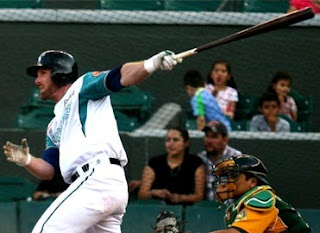 Ryan Mulhern certainly made the most of his six weeks in Mexico. After arriving in Saltillo on June 3, the outfielder proceeded to tear the cover off the baseball, battering Mexican League pitching to the tune of a .366 average with 13 homers and 46 RBIs in 36 games. That was enough to gain the notice of Japan’s Seibu Lions of the Pacific League. Seibu and Mulhern were able to come to terms and the Burbank, California native made his way to the Far East on July 18.

Mulhern was drafted by Tampa Bay out of high school in 2000 and again by St. Louis after two years at the University of Southern Alabama in 2002 before being picked and signed by Cleveland in 2003. The 6’2” Mulhern spent six years in the Indians organization before going to Pittsburgh’s farm system in 2008. His best season was in 2005, when he hit .315 and blasted 32 homers splitting the year with Kinston in the Carolina League and Akron of the Eastern League, winning the Lou Boudreau Award as the Tribe’s top minor leaguer. He spent two years with Lancaster in the Atlantic League before coming to Saltillo last month. Mulhern has hit 131 homers over nine minor league seasons.

Puro Beisbol quoted Mulhern as saying, “I’m very thankful for the opportunity that Sergio (Saraperos president Sergio Ley) offered me to play in Japan…I’m also thankful to the people of Saltillo for all the support and affection they’ve given me during this time. I hope to return to the Saraperos because it’s a great team with great people.”
Posted by Bruce Baskin at 12:01 AM