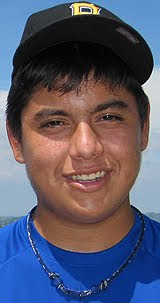 Pitching prodigy Luis Heredia is finding common ground with young hurlers everywhere throughout baseball history: No matter how hard you throw, you need to throw strikes.

Heredia absorbed his first loss in four starts for the Pittsburgh Pirates’ Gulf Coast League rookie team on July 8, dropping a 5-2 decision to the Phillies. The 16-year-old righty only lasted 2.1 innings, letting in two runs on as many hits with five walks and only one strikeout.

The Mazatlan native has found home plate elusive thus far, with the 6’6” Heredia issuing nine bases on balls in nine frames to go with his six strikeouts. After giving up three free passes in 2.2 innings for his first pro outing against the Blue Jays on June 21, Heredia settled down in his next two starts and allowed just one walk with five whiffs over four stanzas before his control problems returned during last Friday’s loss in his first decision of the year.

While his propensity for walks is probably a concern (but not a major crisis, since Heredia IS a 16-year-old away from home for the first time in a foreign country) and his 4.00 ERA won’t knock anyone dead, one thing that probably has Pirates brass pleased is that while opponents are getting on base, they’re not knocking him out of the box. Heredia, whose fastball can reach the mid-90’s, has only allowed a .115 batting average among batters he’s faced and has given up just three hits over nine innings.

Imagine how effective he might be once he starts throwing strikes.
Posted by Bruce Baskin at 12:01 AM