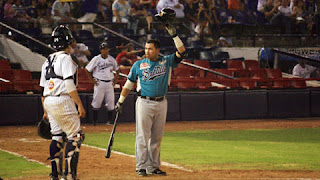 Saltillo Saraperos outfielder Cristian Presichi registered the 1,000th hit of his Mexican League career Tuesday night in a road game against archrival Monterrey. Presichi has played all 12 years of his Liga career with Saltillo.

The 30-year-old Presichi, who hails from Mexicali, reached his milestone in the bottom of the fourth inning against Sultanes’ pitcher Antonio Garzon, a frame in which the defending champions pushed eight runs across the plate en route to a 12-10 victory over Monterrey. Presichi actually singled twice that inning, with the historic knock coming during his second trip to the plate. A respected player throughout the circuit, Presichi doffed his batting helmet in response to applause from the Monterrey fans.

“Thank God I’m here,” Presichi remarked afterward. “It means a lot to reach this mark with a single team. I dedicate this to my wife, son and daughter, who give me the strength to be here, and to my parents.” He also thanked the fans. “They’ve always treated me very well."