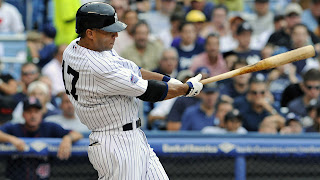 The Obregon Yaquis started out five runs behind and never caught up as the Mexican Pacific League champions fell, 7-3, Thursday night to the host Caguas Criollos in Caribbean Series action at Mayaguez, Puerto Rico.
Caguas gave their starting pitcher Dylan Owen an early cushion by posting five first-inning runs before Obregon had a chance to bat, chasing Yaquis starter Rolando Valdez in the process. Karim Garcia put Obregon on the board with an RBI single in the first and the Mexican champions scored two more times when Criollos third sacker Rey Navarro misplayed a Murillo grounder into a two-run fielding error.
However, the Puerto Rican pennant winners replied with single runs in the fifth and sixth off Obregon reliever Dan Serafini to make it a 7-3 Caguas advantage they would hold the rest of the game. Juan Padilla got the win for Caguas with four shutout innings in relief while Rolando Valdez took the loss. The Yaquis had 12 hits as Justin Christian (pictured) went 3-for-5, but were 1-for-14 with runners in scoring position.
Earlier Thursday, Dominican champs Este held off Venezuelan kingpins Anzoategui, 7-5. Kevin Barker cracked a double and homer to drive in three runs for the Toros, who touched up Caribes starter Amaury Sanit for three runs in as many innings en route to a 6-3 lead. Anzoategui made it a one-run game in the top of the ninth on Jackson Melian’s two-run homer, but Este reliever Julion Manon induced a Luis Nunez groundout to shortstop to end the game. All four teams are now 1-1 in the CS.
Obregon will complete the first half of their double round-robin schedule Friday with a 3PM ET contest against Anzoategui.
Posted by Bruce Baskin at 8:24 PM