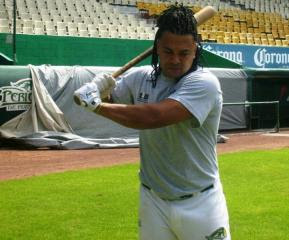 The reigning Mexican League batting champion will be playing for the Reynosa Broncos this season. Willis Otanez, who led the Liga with a .393 average in 2010 while playing for the Puebla Pericos after beginning the season with a 22-game hitting streak, will be moving to Reynosa to play under Broncos manager Homar Rojas.
The native of Baja Vega, Dominican Republic also hit 12 homers and drove in 76 runs in 91 games for Puebla last year before a foot injury ended his regular season two weeks early. He did come back to rejoin the Pericos on their postseason drive to the LMB Championship Series, where they were defeated by the Saltillo Saraperos in five games. Otanez was named Baseball Mexico’s Liga MVP for 2010.
“I’m very happy with the news,” Otanez says. “I’m feeling very good about going there (to Reynosa). I’ve never played by the border but am looking for a championship for the fans, which is the least we should play baseball for.” Reynosa will be his seventh Mexican League team.
The 37-year-old Otanez enters his 21st season of pro ball in 2011. He signed with the Dodgers in 1990 and went on to play in Toronto and Baltimore in 1998 and 1999. He debuted in Mexico with Monterrey in 2001, and has topped the .300 mark six times in ten Liga seasons (including a .376/30/123 year with Veracruz in 2005).
Posted by Bruce Baskin at 12:01 AM