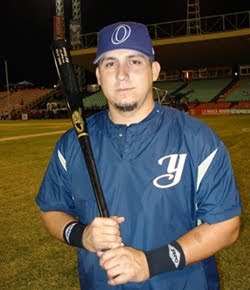 The Obregon Yaquis and Este Toros opened the 2011 Caribbean Series Wednesday in Mayaguez, Puerto Rico, with the Yaquis sneaking past the Toros, 4-3, in 15 innings. As has happened so often in the postseason, Obregon catcher Iker Franco registered a clutch two-out single off Este's Jose Rosario to score Gabriel Gutierrez from second with the game-winning run.

The Dominicans scored once in the top of the third and twice more in the sixth to go up 3-0, but Obregon came back with two scores in the seventh when Carlos Valencia sliced an infield single that drew a throwing error by Toros third sacker Victor Mercedes, and the Yaquis knotted the game at 3-3 in the bottom of the ninth on a two-out, run-scoring single by Barbaro Canizares.
The score remained unchanged into the 15th, when Gutierrez and Doug Clark both singled with two out to set up Franco’s first hit in seven at-bats.
Marco Carrillo, the tenth reliever to follow starter Alberto Castillo, retired one batter to get the win. Rosario suffered the loss after 3.2 innings out of the bullpen.
In the nightcap, Venezuela's Anzoategui Caribes put together a four-run first inning and went on to top the host Caguas Criollos, 5-3. Both teams had six hits, with Caribes shortstop Luis Nunez and Criollos second sacker Alex Cora each collecting a pair of hits. Seth Etherton got the win for the Venezuelans, allowing two runs on three hits in six innings. Willie Collazo took the loss for Caguas despite letting in one earned run in 6.2 frames as four unearned runs were his undoing.
Obregon takes on Caguas Thursday at 7:30PM ET. All CS games can be seen live online at www.espn.go.com/espn3/, while Yaquis games are being carried in Spanish at http://www.ustream.tv/channel/beisbolmexicano.
Posted by Bruce Baskin at 4:31 PM