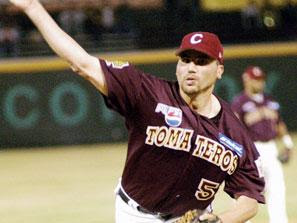 Okay, so I changed my mind on this one.

I was originally going to give this award to Travis Blackley, who was having a great winter for Hermosillo before heading home to Australia and signing with the KIA Tigers of Korea. But when I was poring through ALL the Mex Pac stats to make my All-Star Team selections, one guy’s numbers not only jumped out at me, they put me in a headlock, so I’m going with Jose Silva instead.

Silva was drafted by Toronto out of his Chula Vista, CA high school in 1991 and went on to pitch for the Jays, Pittsburgh and Cincinnati between 1996 and 2002. He’s worked in the Mexican League since 2004, and had 26 saves for Chihuahua last summer. Although the Tijuana-born Silva is 6’6” and listed at 235 pounds, he is also 37 years old and not so likely to overpower batter as he once might have so the righty fooled them instead.

He finished the regular season with a 3-0 record and converted 15 of 16 save opportunities. Good numbers? Try these on: He had a 0.95 ERA and allowed opponents to bat just .165 against him. Silva let in one run over his last ten regular season appearances for the Tomateros, then was 6-for-6 in saving all Culiacan postseason wins while limiting batters to an anemic .136 average with eight strikeouts in six innings.

Usually POY awards go to starters, but I couldn’t NOT pick Silva. His stats are simply too good to pass over.

Thank you very much.....I just came across this honor....José Silva