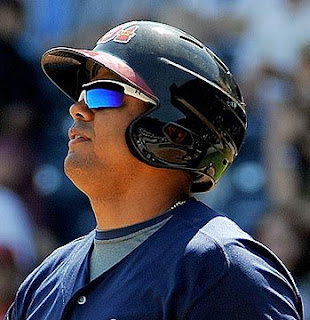 Luis Mendoza cranked out seven strong innings of pitching and the Obregon offense erupted for five third-inning runs Friday night as the Yaquis thumped Guasave, 8-1, to win the opening game of the Mexican Pacific League championship series. A crowd of 13,000 jammed Estadio Tomas Oroz Gaytan on a clear, 70-degree night in Obregon.
Mendoza allowed one unearned run and seven hits while striking out four Cottoneer batters for the Yaquis, who took a first-inning lead on Iker Franco’s two-out, two-run single. Franco has been getting clutch hits throughout the postseason for Obregon. Guasave got a run back in the third on a bizarre play when Leo Heras singled to right and came all the way to score on two errors by Yaquis right fielder Victor Diaz, but the hosts essentially put the game in their pocket in the bottom of the frame with their five-run outburst, keyed by a Barbaro Canizares (pictured) bases-loaded triple off Algodoneros starter Francisco Cordoba. Diaz atoned for his errors with an RBI single in the eighth for Obregon, but the contest was all but decided by then anyway.
The two teams square off again Saturday night in Obregon as Guasave sends Salvador Robles to the mound against the Yaquis’ Rolando Valdez. The series then moves to Guasave beginning Monday.
Posted by Bruce Baskin at 12:01 AM