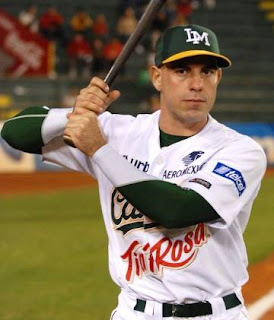 The Los Mochis Caneros scored five runs in the top of the sixth inning and went on to take a 6-4 win at Guasave Saturday night in Mexican Pacific League playoff action. With the victory, Mochis won their best-of-7 first round series over the Algodoneros by a 4-games-to-2 margin.
The contest actually began as a pitcher’s duel between Mochis’ Alejandro Barraza and Guasave’s Mauricio Lara. The Cottoneers were leading 1-0 after five frames behind the four-hit shutout pitching by Lara. Then the Caneros scored five runs in the sixth, including a two-run homer by Omar de la Torre (pictured), to build a lead they’d never lose. Barraza got the win for Mochis with six innings of two-run pitching. Reliever Sergio Mora, who got roughed up in that fateful sixth inning, absorbed the loss for the Algodoneros.
Now that the dust is settling on the first round, it’s time to look at the Mex Pac semifinals. Culiacan, which swept Mazatlan in four straight games, will meet Guasave (the wildcard entry in the semis after earning more wins in a losing first round cause than Hermosillo and Mazatlan did). Mochis advances to take on Obregon, who dispatched defending champion Hermosillo with relative ease in five games. Both series will get underway Tuesday night, with Mochis playing in Obregon and Guasave visiting Culiacan.
Posted by Bruce Baskin at 12:01 AM