HERMOSILLO ON THE BRINK OF ELIMINATION 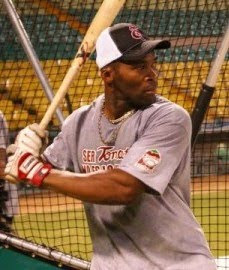 Postseason expectations were high in Hermosillo as the Naranjeros entered the Mexican Pacific League playoffs looking for a second straight pennant. Those hopes are looking dimmer after Obregon parlayed a 7-3 win Wednesday night into a 3-games-to-1 lead in their first round series. Agustin Murillo and Doug Clark belted homers for the Yaquis while starter Francisley Bueno pitched 6.2 innings for the win.

The Culiacan Tomateros completed a four-game sweep of Mazatlan to punch their ticket to the Mex Pac semifinals with a 5-3 win over the Venados in Mazatlan. Culiacan starter Oliver Perez had problems finding the plate with six walks in 4.2 innings, but let in just one run. An Amaury Cazana (pictured) grand slam in the fourth was the difference-maker for the Tomateros as Jose Silva earned his fourth straight save.
Guasave tied their series with Los Mochis at two games each with an 8-4 win in Mochis. Mario Valenzuela and Japhet Amador each whacked two-run homers for the Algodoneros, who roughed up Caneros starter Alberto Castillo (the LMP regular season wins leader with 9) for five runs in 4.2 innings.
Both Obregon and Mochis will host games Thursday night as Culiacan rests up for the semis.
Posted by Bruce Baskin at 12:01 AM