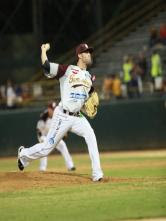 Although it may take some getting used to having neither Hermosillo nor Mazatlan in the Mexican Pacific League playoff semifinals, the four remaining teams combined Tuesday night on a pair of hard-fought games to remind fans there’s lots of good baseball beyond the two traditional LMP powers.

Culiacan staved off a late Guasave rally to beat the Algodoneros, 3-2 in their semifinal opener. Tomateros starter Matt Buschmann (pictured) hurled seven strong innings for the win, allowing one run on five hits. Francisco Cordoba took the loss for Guasave, going 5.2 innings and getting nicked up for two Culiacan runs in the first frame and another in the fourth. Jose Rodriguez scored from third on a Francisco Mendez two bring the Cottoneers to within a run in the ninth, but Jose Silva recorded the final out for his fifth playoff save.
Obregon took a 2-1 lead over Los Mochis in the bottom of the seventh on a Iker Franco RBI single, then clung to that narrow margin the rest of the way to cop the first game of their Mex Pac Final Four series. The scored was tied at a run apiece through six frames as Mochis’ Dan Serafini and the Yaquis’ Luis Mendoza mostly traded zeros. The Caneros scored in the top of the first when Ramon Orantes’ single scored Justin Christian, but Obregon’s Carlos Valencia drilled a sixth-inning RBI safety to tie it at 1-1.
Culiacan and Obregon will host games Wednesday night.
Posted by Bruce Baskin at 12:01 AM