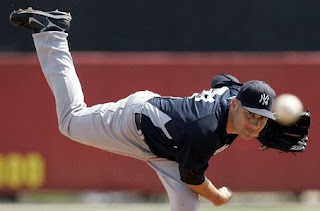 Former major league star third baseman Vinny Castilla appears to be wielding influence these days as an assistant general manager with the Colorado Rockies. On the heels of re-signing Monterrey native Jorge de la Rosa to a new contract potentially worth up to $43 million over four years, the Rockies are said to be interested in signing pitcher Alfredo Aceves (pictured) and infielder Edgar Gonzalez, both free agent Mexican nationals.

Castilla, an original Rockies player in 1993, was born in Oaxaca in 1967 and enjoyed a solid playing career moved into the Rockies’ front office following his 2006 retirement as an MLB player, although he still plays winterball for Hermosillo and was expected to make his season debut this week.
Aceves fashioned a 15-1 record over three years with the Yankees, but was not tendered a contract offer by New York after undergoing collarbone surgery on December 1. Gonzalez went to Japan and hit .263 with 12 homers for Tokyo’s Yomiuri Giants after spending two years playing alongside his brother Adrian in San Diego. Oakland is also said to be looking at “E-Gon,” but Castilla’s presence in Colorado gives the Rockies the inside track.
Posted by Bruce Baskin at 12:01 AM