ROCKIES RE-SIGN DE LA ROSA FOR UP TO $43 MILLION 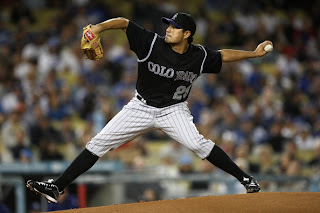 Rather than test the trade market or free agent waters, the Colorado Rockies decided to bring back pitcher Jorge de la Rosa by signing the free agent to a contract worth up to $43 million over four years. De la Rosa will receive a guaranteed $9.5 million in 2011 and $10 million in 2012 plus a player option of $11 million for 2013 (with a $1 million buyout). If he exercises his option, the Rockies have a team option for another $11 million in 2014. The 29-year-old Monterrey native earned $5.6 million with the Rockies in 2010.

According to Jim Armstrong of the Denver Post, de la Rosa turned down better offers from the Pittsburgh Pirates and Washington Nationals to remain in Colorado, where he is being projected as the Rockies’ number two starter behind Ubaldo Jimenez. The 6’1” lefty was 8-7 in 2010 after winning 26 games for Colorado the two previous seasons. His strikeout rate of 8.95 per nine innings since coming to Denver in 2008 is the all-time best among Rockies starters.
Had de la Rosa accepted another offer, the Rockies would have had to search for a proven starter to replace him in the rotation. Free agents Carl Pavano and Kevin Millwood were potential possibilities, as were trades involving Tampa Bay’s James Shields and Gavin Floyd of the Chicago White Sox.
Posted by Bruce Baskin at 12:01 AM