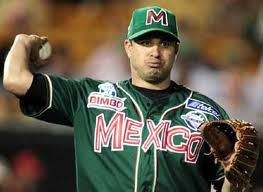 In a final push to prepare for their title defense, the defending Mexican Pacific League champion Hermosillo Naranjeros have added pitcher Elmer Dessens and third baseman Vinny Castilla while reactivating shortstop Jose Luis Sandoval and outfielder Chris Roberson from the disabled list.
The 39-year-old Dessens (pictured) pitched six scoreless innings in three games for the Orangemen last winter and is 23-25 with a 3.41 ERA lifetime in the Mex Pac. The Hermosillo native is 52-64 in 14 major league seasons, including a 4-2 record with a 2.30 ERA in 53 appearances for the New York Mets in 2010.
Castilla, 43, retired from MLB in 2006 after 15 years in the majors, where he is the all-time leader among Mexican-born players with 320 homers and 1,105 RBIs along with a .276 batting average over 1,854 games. While working in the Colorado Rockies front office, he has remained active in winterball with the Naranjeros, for whom he batted .292 with 7 homers in 30 regular season games last season.
Roberson had been hitting .242 with 11 stolen bases in 55 games while the ageless Sandoval was at .236 in 46 contests for Hermosillo before going on the DL. First baseman Erubiel Durazo, who’s been batting .330 with 11 homers in 55 games, is listed as day-to-day with a groin injury.
Posted by Bruce Baskin at 12:01 AM