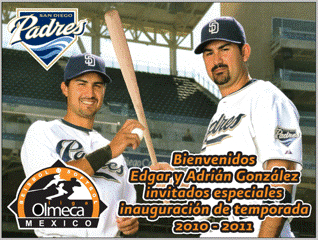 Brothers Adrian and Edgar Gonzalez (pictured with Edgar on left) will be on hand Saturday in Mexico City for the annual opening ceremonies of the Liga Olmeca youth baseball organization. The Liga Olmeca is one of Mexico’s biggest and strongest organizations for budding ballplayers, and a number of current and former major leaguers have taken part in past openers, including Vinny Castilla, Jorge Cantu, Esteban Loaiza, Rodrigo Lopez and last year's special guest, Alfredo Aceves.

The Gonzalez brothers were invited by New York Yankees scout Carlos Fragoso, an Obregon native and current Mexico City resident active with the Liga Olmeca. Fragoso is a godfather to both as the result of a lifelong friendship with their father David, himself a former star amateur ballplayer and head of what ESPN senior writer Jorge Arangure, Jr. once called “the first family of Mexican baseball.”

Adrian Gonzalez is coming off another banner season with the San Diego Padres, for whom he hit .298 with 31 homers and 101 RBIs this year. Edgar, who played alongside Adrian in San Diego, played for the Yomiuri Giants in Japan last summer and hit .263 with 12 homers in 100 games.

Opening ceremonies will be streamed live on the Liga Olmeca website at www.ligaolmeca.mx.
Posted by Bruce Baskin at 12:01 AM