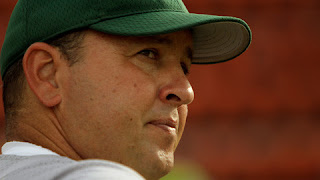 Former Hermosillo Naranjeros manager Homar Rojas is trying to put the kibosh on rumors that he will be managing another Mexican Pacific League club, perhaps this season. “No club has called me,” Rojas tells Puro Beisbol’’s Fernando Ballasteros, “and I am tranquil simply putting together the Reynosa Broncos roster for next season in the Mexican League.”

Rojas led the Naranjeros to the Mex Pac pennant and a Caribbean Series berth last winter, but was fired by Hermosillo after finishing one game out of first place in the LMP’s first half this year with an 18-17 record. Some speculation has had him replacing current Mazatlan helmsman Lorenzo Bundy while other rumors place him in Guasave as a replacement for Algodoneros manager Matias Carrillo, but Rojas himself says that “while I have received calls, it’s from the players themselves who’ve heard the rumors.” He added that in concentrating on his summer gig in Reynosa, he feels almost certain the Broncos will bring in pitcher Brian Adams and infielders Yurendell de Caster, Jesse Gutierrez and Marshall McDougall as imports.
Prior to managing, Rojas was a catcher for 23 years in the minors, hitting 150 homers and topping the .300 mark nine times. The 46-year-old Rojas has managed two LMP championship teams since 2008.
Posted by Bruce Baskin at 12:01 AM