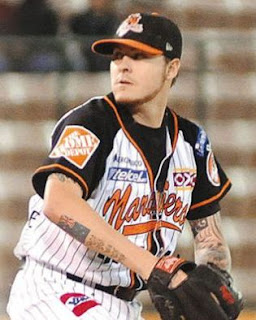 The Mexican Pacific League’s ERA leader is finished for the winter. Former major leaguer Travis Blackley (pictured), who was 5-1 with a 2.09 ERA for the Hermosillo Naranjeros, is back home in his native Australia and through pitching for the defending champion after signing a 2011 contract with the Kia Tigers of the Korea Baseball Organization. The Tigers have ordered him to stop pitching in Mexico despite a Naranjeros website claim that Blackley “did his utmost to get permission” to return to Hermosillo for the rest of the winter.

To replace Blackley on the roster, the Naranjeros picked up another ex-MLB lefty, Randy Keisler, off the Obregon Yaquis roster. Keisler, who went 4-4 in parts of three seasons with the Reds, Athletics and Cardinals between 2005 and 2007, was signed by Obregon in early December after a 3-3 summer with the Mexican League’s Laguna Vaqueros in 2010, but never pitched an inning for the Yaquis.
Elsewhere in the Mex Pac, Mazatlan’s Leo Rosales is out for the year with a shoulder injury after going 11-for-11 in save opportunities with a 2.95 ERA in 20 appearances. Rosales has been replaced on the roster by import third baseman Brian Barden. The Venados also picked up outfielder Edgar Quintero on loan from Los Mochis. Quintero hit .320 with 13 homers in 96 games for Monterrey in the Mexican League in 2010.
Posted by Bruce Baskin at 12:01 AM