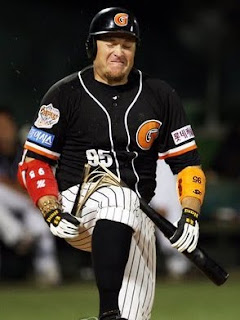 Former major league outfielder Karim Garcia is back in the western hemisphere after a third summer with the Korea Baseball Organization’s Lotte Giants, preparing to spend the winter playing for Hermosillo in the Mexican Pacific League while contemplating where to play in 2011. Garcia is expected to be in uniform November 30 when the Naranjeros host Obregon, Garcia's hometown.

The 35-year-old Garcia hit .361 with a homer and 12 RBIs in 15 games for Hermosillo last winter before heading back to Korea, where he is known as the “Latino Bambino.” Garcia has achieved All-Star status in Korea but became disenchanted with the KBO after a seven-game suspension and $3,000 fine for arguing with an umpire during a September game, and says he’s considering playing for Monterrey in the Mexican League next year. He hit .374 with 20 homers in 76 games for the Sultanes in 2007.