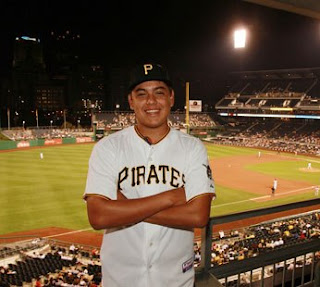 According to Puro Beisbol editor Fernando Ballasteros, Pittsburgh Pirates 16-year-old pitching prospect Luis “El Mariachi” Heredia will not be suiting up for his hometown Mazatlan Venados this winter because of the poor relationship between the team and its former general manager, Jesus “Chino” Valdez.

Valdez, who was replaced as Venados GM in the offseason by ex-pitcher Andres Cruz less than a year after being named the Mexican Pacific League’s GM of the Year, is the Pirates’ scouting supervisor in Mexico and a close friend of Heredia, who signed with Pittsburgh for $3 million in August. Ballasteros quotes Rene Gayo, the Pirates’ head scout in Latin America, as saying that if Valdez had continued as Mazatlan’s GM, Heredia would already be in a Deer uniform.
Heredia has been pitching for Pittsburgh’s instructional team in Florida and will be heading to the Pirates’ Dominican Republic complex for further work. Pirates director of player development Kyle Stark told MLB.com, “Heredia, as a young 16-year-old, has fit in, which says something for someone so young.”
Posted by Bruce Baskin at 12:01 AM