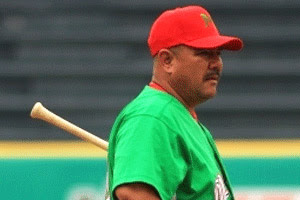 One of Mexico’s more highly-regarded managers will be at the helm of the Monterrey Sultanes next spring.

Enrique “Che” Reyes, who has won pennants in both the Liga and Mexican Pacific League and has led Mexico’s national team in the Baseball World Cup and Caribbean Games, has been picked by the Sultanes to replace former skipper Felix Fermin, who led Monterrey to one pennant and three playoff appearances in four seasons. Fermin is said to be exploring opportunities north of the border.

After ten years as a catcher in the Liga, Reyes (who turns 48 on October 20) began his managerial career in 1998 with Aguascalientes. Since then, he’s compiled a 657-601 career record in 13 seasons as an LMB manager for seven teams. He was working for the Sultanes organization last spring before being loaned to Tabasco, where (as the team’s third manager last season) he led the Olmecas to a 41-39 record.

Reyes is also managing Los Mochis in the Mex Pac this winter.
Posted by Bruce Baskin at 12:01 AM