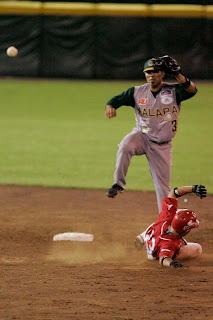 A difficult economy made worse by game cancellations caused by pounding rains this fall have forced the Veracruz Winter League (or LIV) to cut its regular season short and go into its playoffs early. The LIV schedule originally projected the regular season to run from August 26 through November 18, with teams playing a record 70 games each. However, the LIV website reports that the league office decided to conclude the regular season on October 14 with playoff games to begin two days later.
Defending champion Los Tuxtlas took first place (and the top playoff seed) with a 29-9 record while Santa Rosa came in second at 24-11. Originally, a six-team playoff field was envisioned for the LIV, but with the shortened regular season, the league revised the format to include the top eight clubs in the 12-team standings. Los Tuxtlas topped Veracruz in five games to win their semifinal series and reach the Finals, while Xalapa leads Santa Rosa by a 3-2 margin in their semi set.
Posted by Bruce Baskin at 12:01 AM