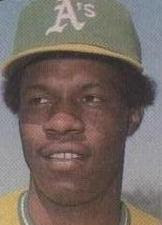 Former Oakland A’s outfielder and Salon de la Fama member Derek Bryant has been appointed manager of the Tabasco Olmecas for the 2011 Mexican League season. Bryant was tabbed as Tabasco skipper after weeks of speculation over who would take over the reins from Enrique “Che” Reyes, who will replace Felix Fermin as manager in Monterrey. Reyes led Tabasco to a 41-39 record after becoming the third Olmecas pilot one month into last season.

Bryant, who briefly played for Oakland in 1979, was one of Mexico’s most dominant batters of the 1980’s and shares the Liga record of homers in a nine-inning game after launching four bombs for Tampico against Aguascalientes on May 14, 1985.
Tabasco will be Bryant’s fifth Mexican League managerial gig. He won pennants with Monterrey in 1995 and 1996 and has led Hermosillo to a pair of Mexican Pacific League winterball titles.
Posted by Bruce Baskin at 12:01 AM